How the Iran Deal Complicates Israel’s Approach to Iran 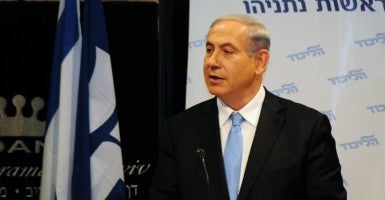 “Israel is not bound by this deal with Iran,” declared Prime Minister Benjamin Netanyahu, “because Iran continues to seek our destruction.” He then added pointedly, “We will always defend ourselves.”

Of course, Netanyahu is right. Israel, like all nations, has the inherent right of self-defense. The crucial question is: How will Israeli choose to exercise that right?

The right of self-defense does not demand that a country wait until it is physically attacked before taking steps to protect itself. But there are rules—and they mark the difference between preventative war and pre-emptive action.

Preventative war is when a country strikes another first because it perceives a potential future threat. Early in the Cold War, there was serious debate in U.S. policy circles about launching a preventative nuclear strike on the Soviet Union—before Stalin had a chance to build up his nuclear arsenal. It never happened, partly because such action would have been unethical, immoral and illegal.

While preventative war is beyond the pale, pre-emptive war is not. If a nation believes that it is under threat, it has the inherent right to protect itself. That requires judiciously weighing two factors: intent and actions.

First, is someone really threatening an attack? Iranian leaders and street demonstrators routinely chant “Death to Israel” and paint glorious visions of “a world without America.”

It can be argued that these are just rhetorical constructs, to be taken no more literally than football fans’ calls for their opponents to be “crushed.”

On the other hand, Hitler candidly published his dreams of world domination in 1925. Few took them seriously as a blueprint for action; most dismissed them as Hitler just “playing to the crowd.”

The Jews know how that turned out better than anyone. And they’ve heard nothing but a steady drumbeat of anti-Israeli rhetoric from Tehran since the regime took over. Is Netanyahu supposed to just ignore it?

Second, there is the issue of whether your adversary has the means to carry out the threat.

Just overlay the range of Iran’s missile force on a map of the Middle East, and it’s clear Tehran has the ability to deliver the goods.

This leaves us with the ultimate question: What is the appropriate and proportional response?

The question isn’t new. Arguing over how to deal with the Iranian threat has been a top-tier strategic debate for Israeli leaders for over a decade.

And there’s nothing to suggest that they’ve figured out the answer. If they had, they would have acted by now.

What complicates the Israelis’ decision is that they can’t deal with Tehran in isolation. Their plate is piled high with serious security concerns. Hamas is making trouble from the Gaza Strip, while Hezbollah makes trouble from Lebanon. The Sinai’s a mess, and they have to worry about the stability of Egypt and Jordan. And then there’s ISIS, whose reach keeps extending throughout the region.

Worrisome, too, is the relentless information warfare, a global campaign aimed at undermining the legitimacy of the Israeli state and the Israeli people. And increasingly wobbly policies from its most important ally, the U.S., are giving Tel Aviv the jitters.

Small wonder that self-defense looms paramount in the minds of Israeli leaders. They are duty-bound to protect their people.

Israel’s right to defend itself is unquestionable. But how it should exercise that right remains a thorny question.

All that can be said with absolute confidence is that the Vienna agreement has not made Israel’s options any easier. By empowering Iran, the deal is all but guaranteed to spark a conventional arms race—and quite possibly a nuclear one—in what is already the most unstable and dangerous region in the world.

Originally published in the Bradenton Herald, through McClatchy Tribune Wire.