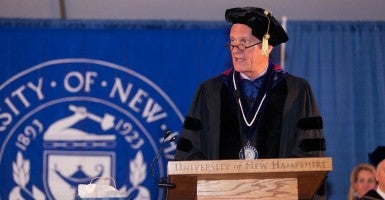 The University of New Hampshire’s “Bias-Free Language Guide” considers the words “mothering” and “fathering” to be problematic, biased language.

According to Campus Reform, the guide suggests replacing “mothering” and “fathering” with words such as “parenting” in order to “avoid gendering a non-gendered activity.”

In response to widespread backlash, including a tweet from presidential candidate Donald Trump, University of New Hampshire President Mark Huddleston issued a statement distancing the guide from official school policy:

“I want to make it absolutely clear that the views expressed in this guide are NOT the policy of the University of New Hampshire.  . . . It is ironic that was probably a well-meaning effort to be ‘sensitive’ proves offensive to many people, myself included.”

University of New Hampshire has subsequently blocked the page, making the guide inaccessible.

In its efforts to be ‘sensitive’, The Bias-Free Language Guide ignores an important truth: mothering and fathering are in fact distinct and cannot be considered “non-gendered activities”.

In a recent Daily Signal piece, The Heritage Foundation’s Ryan Anderson makes the point that “there is no such thing as ‘parenting.’ There is mothering, and there is fathering, and children do best with both.”

Sociology, psychology, and biology all support the fact that the complementary interactions mothers and fathers have with their children make a difference in the child’s development.

For example, the distinctiveness of fathers is shown by the fact that 35 percent of girls in the United States whose fathers left before age 6 became pregnant as teenagers.

By contrast, only 5 percent of girls whose fathers stayed with them throughout childhood became pregnant as teenagers.

Through seeking to eradicate the “exclusive” terms “mothering” and “fathering” in favor of the gender-neutral “parenting,” the University of New Hampshire’s Bias-Free Language Guide disregards the distinct sacrifices and contributions that mothers and fathers make for their children.