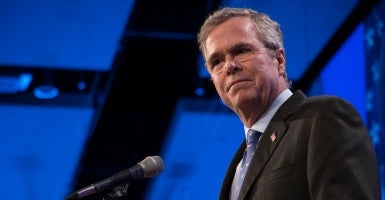 Jeb Bush spoke on racial injustice Friday at the National Urban League's annual convention after a fiery attack from Hillary Clinton inferring Bush has hindered the black cause. (Photo: iprimages/Flickr/CC BY 2.0)

Before a predominantly African-American audience, Jeb Bush on Friday lauded President Obama’s recent comments on racial injustice, while also brushing aside a fiery attack from Hillary Clinton who just an hour before inferred that the former governor of Florida has hindered the black cause.

Bush’s adamancy to appeal beyond the GOP’s typical base was evident as he trekked into traditionally Democratic terrain to discuss the “unjust barriers to opportunity and upward mobility” during a speech at the National Urban League’s annual convention.

“When President Obama said that ‘for too long we’ve been blind to the way that past injustices continue to shape the present’ he is speaking the truth,” Bush said of the president’s remarks following the fatal shooting at a historic black church in Charleston.

Bush and Ben Carson were the only two Republican candidates who spoke at the conference. All 21 2016 candidates were invited, but only five accepted the invitation, including Democratic candidates Hillary Clinton, Vermont Sen. Bernie Sanders and former Maryland Gov. Martin O’Malley.

Hillary Clinton caught headlines early on after making an indirect, but brazen jab at Bush’s “Right to Rise” super PAC.

“I don’t think you can credibly say that everyone has a right to rise and then say you’re for phasing out Medicare or for repealing ObamaCare. People can’t rise if they can’t afford health care,” Clinton said.

“Race still plays a significant role in determining who gets ahead in America and who gets left behind,” she said.

Bush pivoted to the education system, emphasizing the growing gap between technology and access to education as the “worst inequality in America today.”

He ticked off his accomplishments as governor, including the removal of the Confederate flag from Florida’s state capitol 14 years ago, the “easy call” to increase the number of black judges by 43 percent, and the increased state contracts with minority businesses.

“You can’t serve all the people unless you represent all the people,” Bush said. “Social progress is always the story of widening the circle of opportunity.”

The Urban League convention marked the first time Clinton and Bush shared a stage at the same event since the two announced their candidacies. Bush has focused much of his campaign strategy on the need to broaden the GOP base, particularly in regard to minorities.

He closed his speech with a promise to the audience that he would work with them to “better” the community, whether as their “neighbor” or president.