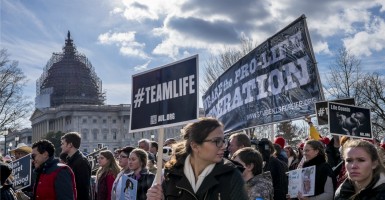 The Daily Signal reached out to pro-life groups to ask what they would tell consumers about companies that donate to Planned Parenthood. (Photo: Pete Marovich/UPI/Newscom)

On Tuesday, The Daily Signal published a list of companies that donate or have donated directly to Planned Parenthood, either through grants or through matching employee gifts. We used data from 2nd Vote, a website and app that tracks causes that corporations donate to.

We asked each company about its donations to the nation’s largest abortion provider.

Spokespersons for three of the companies—Coca-Cola, Ford and Xerox—objected to their inclusion on the list. When The Daily Signal provided the companies with a Planned Parenthood website listing them as donors, they said they would be contacting the organization to be removed.

Planned Parenthood later removed all corporate donors from the site.

Many of the companies acknowledged that they contribute to Planned Parenthood through their employee gift matching programs.

The Daily Signal reached out to pro-life groups to ask what they would tell consumers about these companies.

Kristan Hawkins, the president of Students for Life of America, said that “this shows how badly Planned Parenthood is hurting.”

“A couple of years ago, businesses would have replied that they proudly supported Planned Parenthood or live in fear if they didn’t (remember what they did to the Komen Foundation?) but today they are the defense, rushing to say that they are not directly donating to Planned Parenthood but instead are giving their employees the option to donate—which is still giving money to the abortion giant,” Hawkins said.

“You can’t just donate to Planned Parenthood and say your donation is earmarked for utilities or staff or paper clips but not abortion.”

“The building and the staff and the utilities all contribute in some way to abortion and are involved [in] it,” Hawkins said. “Any money whatsoever going to Planned Parenthood in any way contributes to the more than 327,000 abortions they commit every year—and who knows what else they do behind closed doors, some of which is thankfully now being revealed because of the Center for Medical Progress videos.”

Rev. Clenard Childress of the Life Education and Resource Network said that he applauds companies who practice corporate responsibility, but that the companies on the list need to more carefully scrutinize “to whom they are writing checks.”

“The community should hold them accountable,” Childress said.

He criticized the companies who said they will donate to “any” organization their employees choose.

“Would you write a check to the Ku Klux Klan?” Childress asked.

Kristen Day, the executive director of Democrats for Life, said her organization has called for Planned Parenthood to be defunded because there “have always been concerns” about it.

She said that not only is Planned Parenthood allegedly selling fetal organs, but its employees also “changing their abortion procedure” to obtain them.

“We know, from history, that we cannot trust Planned Parenthood,” Day said.

“Just a few years ago, the Komen Foundation decided not to provide grants to organizations who do not actually perform mammograms. Planned Parenthood, who does not perform mammograms, embarked on a huge PR campaign to complain about Komen’s policy because their half a million dollar grant was pulled. PP raised over $3.3 million in 24 hours (6 times the grant they would have lost). Komen was hit hard by the smear campaign and lost millions of dollars at future fundraising events. Planned Parenthood’s grant for mammograms was restored, but they still do not perform mammograms. The grant would have paid for 50,000 mammograms for women.”

“American tax dollars should be allocated to companies we can trust, not to organizations that bring customers into their business, offer a procedure—abortion—and in turn benefit financially from their recommendation, selling hearts, lungs and livers,” Day added.