Carly Fiorina: Technology Can Help People Use ‘God-Given Gifts’ to Fulfill Their Potential 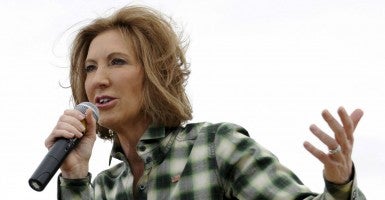 Businesswoman Carly Fiorina spoke in Webster City, Iowa, Thursday and said, “The highest quality of leadership is to unlock potential in others.” (Photo: Dave Kaup/Reuters/Newscom)

WEBSTER CITY, Iowa—Former CEO of Hewlett-Packard Carly Fiorina spoke at a local Maid-Rite here on Thursday; saying technology is a tool than can be used “to re-engage citizens in the process of their government.”

“We need to try a different kind of leadership,” she said.

Fiorina, who is running as a Republican nominee for president in 2016, highlighted the importance of using technology for the future of the country.

“Technology defines our century. Technology is being used against us.”

At the Maid-Rite in Webster City, @CarlyFiorina says everyone has God-given gifts #iapolitics pic.twitter.com/dTPxU8ND0T

“I’m running for the presidency of the United States because I think our nation is at a pivotal time.”

If elected president, Fiorina would hold a radio address once a week and ask the American people to respond to questions by using their smartphone technology to interact with the Oval Office.

Fiorina spoke of her belief in the ability of the American people: “The highest quality of leadership is to unlock potential in others.”

“We have come to a point where the potential of the people of this nation is being crushed by the weight, the power, the cost, the complexity, the ineptitude, and the creeping corruption of the government of this nation.”

Fiorina said the government has become a “giant, bloated, unaccountable, inept bureaucracy,” and made note of how crony capitalism has created problems in the economy.

“Every single one of us needs, at some point in our lives, somebody to take a chance on us.”

Wanting opportunity for people, Fiorina said the system in the United States has to change, “We tangled people’s lives up in webs of dependence.”

She believes programs need to be changed to get people off of government dependency and to be able to get jobs.

Spending must be cut in this country, she said, and growth in the economy must be done by putting people back to work. Some form of zero-based budget also needs to be put in place.

“We have to revitalize the engine of economic growth in this nation.”

Laying out her policy vision for the economy, Fiorina said a 70,000 page tax code needs to be cut down to about three pages: “You roll back a thicket of regulation.”