5 Alternatives to the Iran Deal 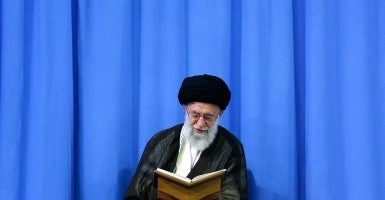 Over the past several days, the Obama administration has been working hard to persuade Congress and the American people that the recently negotiated deal with Iran ought to be approved—or there will be a war in the Middle East.

The president has said himself that:

There really are only two alternatives here:  Either the issue of Iran obtaining a nuclear weapon is resolved diplomatically through a negotiation, or it’s resolved through force, through war.  Those are the options.

In reality, there are many other, better options on the spectrum between the administration’s flawed deal and war in the Middle East.

Here are the most appealing alternatives to Obama’s bad deal:

Congress should decide to reject the administration’s deal, and here are the reasons why:

While the administration is trying to portray a lack of a deal as a major disaster, even leading to war, the fact is, sanctions are what convinced Iran to begin negotiations in the first place.

Without a deal, U.S. and regional sanctions would continue to bite and impede Iran’s economy.

Jacob Lew, U.S. Secretary of Treasury, called these sanctions powerful with or without the deal.

In parallel, the United States could further strengthen its sanctions on the Iranian regime.

This would prevent Tehran from financing its military buildup, terrorist network, or nuclear program with hundreds of billions of dollars of sanctions relief.

Iran would be denied access to modern technologies, and its ballistic missile tests would remain banned, unlike when the Iran deal comes into effect.

Behind closed doors (and sometimes behind open doors), U.S. allies are not particularly keen on the administration’s Iran deal.

A majority of them will have to live with consequences of a better equipped, more assertive, and better financed Iran continuing its terrorist activities in the Middle East, and perhaps worldwide.

Let’s not forget Iran tried to kill a Saudi Ambassador to the United States in Washington, D.C.

Had the attack been successful, the United States would be at a state of war with Iran. U.S. allies would appreciate a principled U.S. stand rejecting this flawed deal that makes them more secure from effects of the Iranian nuclear program in the long run.

4. Keep All Options on the Table

The U.S. must improve its credibility with respect to Iran and make clear that the United States is willing to use force should Iran decide to build a nuclear weapon.

Congress might contribute to this credibility should the deal be rejected if it passed a resolution expressing support for preventive military action should Tehran continue on its path to nuclear weapons.

5. Negotiate From a Position of Strength

As sanctions continue to bite and Iran is more insulated diplomatically and militarily, its incentive to negotiate will increase.

Time is on the U.S. side, not on the side of the Iranian mullahs.

In the past, the United States has not shied away from leaving negotiations that are against our best interests—including with much more capable enemies like the Soviet Union.

Yet the Cold War did not end with an agreement or with a war.

Similarly, the United States gave in on the North Korean nuclear weapon program in a vain belief that North Korea will change and become peaceful.