Five Years After Dodd-Frank, Worry of ‘Too Big to Fail’ Still Persists 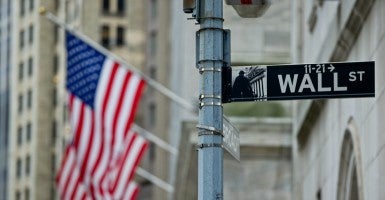 Five years after Congress passed the 2010 Dodd-Frank Wall Street Reform and Consumer Protection Act as a response to the 2008 financial crisis, Americans remain concerned about the potential for big-bank taxpayer bailouts.

Congress blamed the financial crisis on risky investments and overlooked regulatory failure, according to Norbert Michel, research fellow in financial regulations at The Heritage Foundation. Dodd-Frank was supposed to end “too big to fail” and protect the American taxpayer by ending bailouts.

Did Dodd-Frank achieve what it set out to do?

“This hasn’t ended bailouts at all,” said Paul G. Mahoney, Dean of the University of Virginia School Law School, during an event at The Heritage Foundation Tuesday.

Furthermore, Mahoney added that it is “hard to dispute the fact that Dodd-Frank has been really, really bad for smaller banks.”

Alternatively, according to Sen. Richard Shelby, R-Ala., chairman of the Senate Committee on Banking, Housing, and Urban Affairs, “Dodd-Frank has actually encouraged the biggest banks to become larger and more concentrated.”

Michel pointed out that Dodd-Frank established the Financial Stability Oversight Council to select non-bank financial firms for increased regulatory supervision by the Federal Reserve. This very action identifies firms that the government does not want to fail, further enshrining the “too big to fail” doctrine.

Kevin Cirilli, a political reporter for The Hill, argued that politicians on both sides of the aisle have admitted that “too big to fail” still exists under Dodd-Frank.

Twenty-sixteen presidential candidates Bernie Sanders, Hillary Clinton, Ted Cruz and Jeb Bush are all mentioning “too big to fail” on the campaign trail and proposing their respective reforms, Cirilli said.

“Whether you are a Democrat or a Republican, the politics of this seem to indicate that Americans are still very concerned for the potential for there being more bailouts,” Cirilli explained.

Shelby expressed his own discontent with Dodd-Frank.

“I do not believe that any commercial institution, financial or otherwise, should be ‘too big to fail,’” Shelby said. “The mere concept in a free market economy is repugnant and indefensible.”

To address the shortcomings of Dodd-Frank after five years, the Banking Committee under Shelby’s leadership released the Financial Regulatory Improvement Act of 2015 in May.

The bill aims to give financial institutions regulatory incentives to reduce systemic risk and encourage less risk to the entire financial system.

“‘Too big to fail’ is far from dead,” Shelby concluded during his speech. “We can, however, take meaningful steps to ensure a safer financial system and thereby reduce the probability of taxpayer bailouts in the future.”