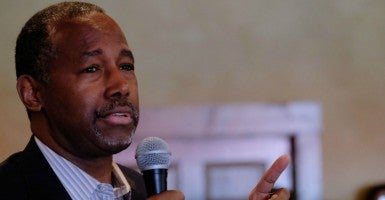 HAMPTON, Iowa—Speaking to Iowans Thursday, Republican presidential candidate Ben Carson spoke out against the Iran nuclear deal, warning that it puts the “whole country in jeopardy.”

Carson told about 40 attendees at the Franklin County Fair here that the nuclear deal represents “a complete lack of common sense.”

The deal is designed to contain Iran’s nuclear program in exchange for sanctions relief.

“It [the deal] doesn’t disassemble the nuclear infrastructure of Iran,” Carson said. “It lifts the economic sanctions … It allows for arms dealing and ballistic missiles. And if we want to inspect something, it has to go through a committee on which Iranians sit, and on which the Russians sit.”

Carson said that the Iranian threat is not the only problem in the country right now.

“There’s a war on women, racial wars, age wars, income wars, religious wars, every war that you can imagine is going on,” Carson said.

Stating that religious freedom is “very much under attack,” Carson said as president he would “work with Congress” to have laws that protect religious rights.

In regards to the recent Supreme Court ruling legalizing gay marriage, Carson said, “That is not liberty and justice for all.”

“I see our country and our culture disintegrating,” Carson said. “And we’re in the process of giving away all the values that made America into a great nation for the sake of political correctness.” Improving the economy and replacing Obamacare are two of Carson’s priorities.

“I want us to reestablish ourselves as the number one economy in the world,” Carson said. “We have the most powerful economic engine the world has ever seen.”

Carson would like to see the nation support “entrepreneurial risk-taking” and “capital investment.”

“We need a system where the tide rises and lifts all folks, not one where we keep grabbing and dividing and cutting until there’s nothing left,” Carson said. “That’s called socialism. We don’t need socialism.”

Answering a question from the crowd on national defense, Carson alleged that the morale of the U.S. military is at the lowest it’s ever been.

“We are not ready for combat,” Carson said.

Carson is not in favor of the recent sequester cutting 40,000 troops.

“The sequester is cutting the heart out of the personal,” Carson said.

Carson said the U.S. “needs to stop the silliness.”