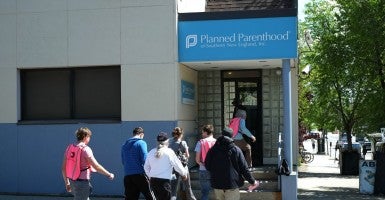 Conservative lawmakers have called for the government to defund Planned Parenthood following the release of a graphic video showing a top official describing the group's sale of fetal body parts. (Photo: Jesse Nemerofsky/ZUMAPRESS/Newscom)

Conservatives in the House were quick to push for defunding Planned Parenthood Wednesday after a video surfaced showing a top official graphically describing the group’s sale of body parts from aborted fetuses.

“No taxpayer funds should be affiliated with something that so many people find completely reprehensible,” said Rep. Cynthia Lummis, R-Wyo.

Lummis said the federal government should only support the group if it provides services promoting women’s health, but added funding should be stripped if those services include abortions.

“If even one affiliate of one Planned Parenthood organization anywhere in this country is involved in any way with abortions, then we should defund them.”

Reps. Tim Huelskamp, R-Kan., and Jim Jordan, R-Ohio, described revived momentum in the House to halt the “hundreds of millions of dollars” provided to Planned Parenthood through taxpayer funded subsidies.

In the video released Tuesday, undercover activists from the Center for Medical Progress pose as buyers from a biotech firm in a lunch meeting with Deborah Nucatola, Planned Parenthood’s senior director of medical research.

While sipping a glass of wine, Nucatola describes the most common body parts transported for research and says clinics can be reimbursed between $30-to-$100 “per specimen.”

Planned Parenthood immediately released a statement saying the video misrepresents the organization’s participation in tissue research programs and denied the group makes a profit off of them.

“We help patients who want to donate tissue for scientific research, and we do this just like every other high-quality health care provider does—with full, appropriate consent from patients and under the highest ethical and legal standards,” a spokesperson said.

Under U.S. law it is illegal to sell or purchase human body parts, but donating tissue for scientific research is legal as long as there is no profit.

House Speaker John Boehner called for a congressional investigation into Planned Parenthood a day after the video’s release.

“When an organization monetizes an unborn child—and with the cavalier attitude portrayed in this horrific video—we must all act,” he said in a statement.

Huelskamp said the hearings are the minimum congress should do in response to the “shocking” video.