Jeb Bush: 4% Growth ‘Needs to Be the Aspiration’ 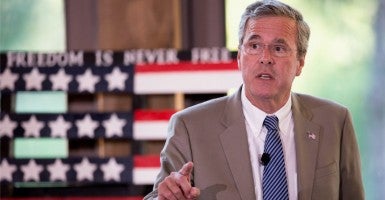 AMES, Iowa—Former Florida Gov. Jeb Bush wants America to “aspire to greatness again” by growing the economy 4 percent per year. Bush, a Republican candidate for president in 2016, told this to Iowans Monday evening as he made a keynote address at the Prairie Moon Winery.

By growing the economy at this rate, Bush said the middle of America could have rising income and be “less dependent upon government.”

Stating how “convoluted” and complex the U.S. tax code is, Bush wants to fix the entitlement system and fix a “broken” immigration system and turn “it into a driver for economic prosperity for all of us.” He also wants to embrace “the energy revolution in our midst.”

“One of the greatest success stories in America it taking two existing technologies, hydraulic fracking and porcine drilling … and putting them together in a free market with private property rights at the core,” Bush said.

This would allow the United States “to consider exporting oil and gas” and “re-industrialize the country.”

Bush continued, “There is a way to grow at 4 percent but it’s going to require a different kind of leadership than exists today in Washington, D.C.”

Bush feels his leadership experience gained from governing the “purple” state of Florida is what the country needs. “We made a difference,” Bush said, as taxes were cut every year in Florida under his leadership. He also said he reduced the Florida state government workforce by 13,000.

As a highlight of his career, Bush spoke of reforming the Florida education system “and leading the nation in terms of rising student achievement with the first statewide voucher programs and the largest school choice programs in the country.”

He said the country needs to “leave more opportunity for the next generation than what was afforded us.”

“We need to be engaged in this world. We need to rebuild our military capability,” Bush said.

Bush claimed the “worst scandal of all is how we’ve treated our veterans.” He said that when veterans come home, “We should have the best care for them.”

To create more peace in the world, our enemies must fear us and our friends must know we have their back, Bush said.

“I may sound like I’m a broken record about this but I do think that 4 percent growth as far as the eye can see needs to be the aspiration … for this country again because so many things will change,” Bush said.

“We’re not going to get that kind of high sustained economic growth in America unless we reestablish America’s presence in this world.”