After Supreme Court Gay Marriage Ruling, How We Can Protect Freedom for Everyone 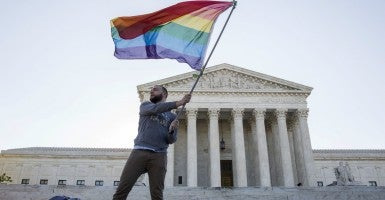 In front of the Supreme Court. (Photo: Joshua Roberts/Reuters/Newscom)

Even now that the Supreme Court has redefined marriage, Americans who believe that marriage is union of husband and wife should be free to live and work in accord with their convictions. That’s a central theme of my new book, “Truth Overruled: The Future of Marriage and Religious Freedom.”

When he “evolved” on the issue in 2012, President Barack Obama insisted that there were reasonable people of goodwill on both sides of the marriage debate. Supporters of marriage as the union of a man and a woman “are not coming at it from a mean-spirited perspective,” he insisted. “They’re coming at it because they care about families.

He added that “a bunch of ’em are friends of mine … you know, people who I deeply respect.” But as I recount the stories of bakers, florists, photographers and adoption agencies, there are considerable grounds to worry about the government’s respect for the beliefs of all Americans.

Respecting religious liberty in the marketplace is particularly important. After all, as the first lady, Michelle Obama, put it, religion “isn’t just about showing up on Sunday for a good sermon and good music and a good meal. It’s about what we do Monday through Saturday as well.”

And that’s precisely why religious liberty protections in the economy are so essential.

As citizens of a self-governing republic, we should pursue laws and public policies that serve the common good. We should work to ensure respect for the religious liberty of all Americans, not just for ourselves.

In particular, we should work to protect the rights of individuals and the associations they form—businesses and charities, schools and social services—to speak and act in the marketplace in accordance with their belief that marriage is the union of a man and a woman.

Respect for religious liberty takes several forms. Charities, schools, and other organizations that interact with the government should be held to the same standards of competence as other groups, but their view that marriage is the union of a man and a woman should not exclude them from government programs.

Government rightly withholds taxpayer dollars from certain organizations—those that perform abortions, for example, or those with racist policies—but upholding marriage as the union of a man and a woman is not like killing or like racism, as I explain in detail in my book, and the cases thus should be treated differently.

Government policy—especially with respect to grants and contracts—should not trample on the consciences of citizens who dissent from official policies on sexuality. Government policy that discriminates against faith-based social service providers that believe marriage is a male-female relationship undermines our nation’s commitment to reasonable pluralism and diversity.

Educational institutions, for example, should be eligible for government contracts, student loans, and other forms of support as long as they meet the relevant educational criteria. Adoption and foster care agencies that meet basic requirements for the welfare of children should be eligible for government contracts without having to abandon their values, especially their religiously informed beliefs about marriage. Protecting the diversity of private providers, each serving families that share its values, will increase the number of children who are connected with permanent, loving families.

Government employees deserve similar protection. Consider a county clerk who has served in her job for decades issuing marriage licenses. Now the government has redefined marriage—and her job. Should she be forced in all circumstances to violate her beliefs? As I explain in “Truth Overruled,” the government can ensure that all eligible citizens receive marriage licenses without forcing each and every clerk or magistrate to issue them.

Consider a police officer asked to ride his motorcycle at the front of a gay pride parade—not to provide security for the parade but to be a part of it on the department’s behalf. Should he be forced to violate his beliefs?

Of course, everyone deserves the protection of the police department. And of course an officer on patrol can’t pick and choose which calls to respond to. In particular, all officers need to respond in emergencies. But none of this requires every police officer to accept every assignment ahead of time if his religious beliefs are at stake, alternatives are available, and accommodating him would compromise no one’s safety. Indeed, Title VII of the Civil Rights Act of 1964 requires the government to accommodate conscientious objectors as best it can.

The law of religious accommodation for public employees is complicated, but perhaps not as difficult as we sometimes make it. Professor Robin F. Wilson of the University of Illinois Law School, who supports same-sex marriage as a policy matter, writes, “A common refrain is that religious objectors in government service should do all of their job or resign. This stance conflates the public receipt of a service offered by the state with the receipt of that service from each and every employee in the office who is available to do it.”

Specific Protections for Beliefs About Marriage

If we’re going to disagree over the nature and purpose of marriage, then protecting the religious liberty rights to dissent—to speak that dissent and to act on that dissent—is essential. The federal government and the states must protect the rights of Americans and the associations they form—both nonprofit and for-profit—to speak and act in the public square in accordance with their beliefs.

But as I document in “Truth Overruled,” a powerful campaign of big business, big media and big government is attempting to force the entire nation to show approval of same-sex marriage. This coercion of conscience is outrageous in a nation founded on religious freedom, and further measures are necessary.

There are some solutions.

The recently proposed First Amendment Defense Act would prevent the federal government from engaging in such coercion. It would enact a bright-line rule that government can never penalize someone just for acting on his belief that marriage is the union of husband and wife. The bill is sponsored in the House of Representatives by Republican Raul Labrador of Idaho and in the Senate by Republican Mike Lee of Utah. Congress should pass the bill, and citizens should be given similarly specific protection at the state level.

Predictably, the left has attacked this bill. The Sunday after the Supreme Court’s ruling in Obergefell, The New York Times religion columnist, Mark Oppenheimer, wrote a column for Time magazine headlined  “Now’s the Time to End Tax Exemptions for Religious Institutions.” Taking issue with Sen. Lee, Oppenheimer argued, “Rather than try to rescue tax-exempt status for organizations that dissent from settled public policy on matters of race or sexuality, we need to take a more radical step. It’s time to abolish, or greatly diminish, their tax-exempt statuses.” But as Americans once understood, the power to tax is the power to destroy. We clearly have work to do.

America is in a time of transition. The court has redefined marriage, and beliefs about human sexuality are changing. Will the right to dissent be protected? Will our right to speak and act in accord with what Americans had always believed about marriage—that it’s a union of husband and wife—be tolerated?

Most Americans say yes, they want to be a tolerant, pluralistic nation. They want peaceful coexistence. I agree with them.

It’s only ideologues and activists who want to sow the seeds of disharmony by having the government coerce those with whom they disagree. We must work together to protect these cherished American values.

The First Amendment Defense Act is one way of achieving civil peace even amid disagreement. To protect pluralism and the rights of all Americans, of whatever faith they may practice, this bill is good policy. Liberals committed to tolerance should embrace it.