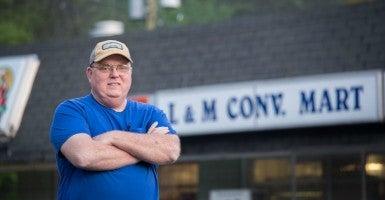 More than a month after dismissing a case involving a Fairmont, N.C., convenience store owner, the federal government returned the more than $100,000 it took from him last year.

But the government still refuses to pay the lawyers’ fees and expenses that the store owner is entitled to.

According to documents filed in federal court this week, the government returned the $107,702.66 it seized from L&M Convenience Mart owner Lyndon McLellan, depositing the money into the store’s bank account on June 29.

“Actions speak louder than words,” Robert Johnson, a lawyer at the Institute for Justice who represented McLellan, wrote in the filings. “At the same time that the government has continued to slander Lyndon as a criminal in its filings in this court, the government has returned the money that it seized from Lyndon’s business.”

“There should be no clearer indication that this forfeiture proceeding has drawn to a close—with Lyndon the prevailing party and thus entitled to attorney fees, costs, and interest under governing federal law,” Johnson continued.

Civil asset forfeiture is a tool that gives local, state and federal law enforcement agencies the power to seize property and money if it’s suspected of being connected to a crime.

However, in recent years, innocent property owners have become victims of civil asset forfeiture, as they are often never charged with or found guilty of a crime after their belongings are seized.

In McLellan’s case, the government alleged that he committed structuring violations over a period of three years, which involves making consistent cash deposits or withdrawals of less than $10,000 to avoid bank reporting requirements.

Neither McLellan nor his niece, who was in charge of making deposits, were aware they were committing structuring violations. However, his niece did say that a bank teller at the Lumbee Guaranty Bank advised her to make deposits of less than $10,000.

Months after the IRS took McLellan’s money, the government offered to return half of it.

He declined their settlement.

McLellan decided to fight the government to get all of his $107,702 returned, and with Johnson’s help, was successful.

In May, Assistant U.S. Attorney Stephen West moved to dismiss McLellan’s case, citing a policy change at the Justice Department regarding seizures conducted because of structuring violations.

Though the government deposited McLellan’s money back into L&M’s bank account, Johnson is still fighting to have McLellan’s lawyer fees, expenses and interest on the money covered.

Under the Civil Asset Forfeiture Reform Act of 2000, a property owner who “substantially prevails” in a federal forfeiture case is entitled to have such fees and expenses covered by the government.

Though Johnson represented the North Carolina man pro bono, McLellan hired a local lawyer first, which cost him more than $20,000.

Additionally, money seized by the government remains in an interest-bearing account, and though McLellan is entitled to the interest earned, the government is working to keep it.

In documents filed July 6, West argued that the government had probable cause to seize McLellan’s money, and thus isn’t responsible for the lawyers’ fees, expenses and interest.

“The statements that the government is making are only for its self-interested purpose of not making Lyndon whole,” Johnson told The Daily Signal.