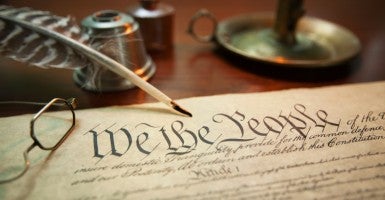 One third of Americans have no clue what rights they have under the First Amendment.

The Newseum’s 2015 State of the First Amendment survey painted a bleak picture of Americans’ ability to remember what rights they are guaranteed by the foundation for individual freedom.

Freedom of religion is the very first of the five rights protected under the First Amendment, yet only 19 percent could recall it, marking a 10 percent drop from last year.

An even fewer 1 in 10 surveyed were able to remember freedom of the press while an equal number could identify the right to assemble. The right to petition found its way to the bottom as a mere 2 percent could name the freedom. From the Newseum’s 2015 State of the First Amendment survey. (Photo: PRNewsFoto/Newseum Institute/Newscome)

57 percent of Americans remembered the First Amendment protects freedom of speech, an 11 point drop from last year’s 68 percent. In all, 33 percent could not name a single right.

Though knowledge of the First Amendment wavered, Americans’ support for it increased over the past year.

Three-fourths of Americans feel the First Amendment “does not go too far” in protecting freedoms, a spike from last year’s 57 percent who felt the same.

The Newseum attributed the safety threat following the 2013 Boston Marathon bombings for last year’s drop in support, saying numbers have since normalized. The poll found a similar fall after the Sept. 11, 2001 terrorist attacks.

The poll surveyed 1,002 adults and has a margin of error at plus-or-minus 3.2 percentage points.