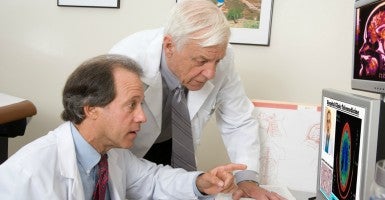 It is now legal for physicians in Iowa to administer abortion-inducing pills by webcam.

Last month, the Iowa Supreme Court ruled a ban on using webcam communication to administer abortion-inducing pills was unconstitutional. This telemedicine abortion procedure, used only at Planned Parenthood clinics in Iowa and Minnesota, is banned in 18 other states for safety reasons.

Since Planned Parenthood of the Heartland in Iowa became the first to use the webcam procedure in 2008, more than 7,200 babies have been aborted this way. The organization operates seven telemedicine sites in Iowa that use a secure video conferencing system, compliant with Health Insurance Privacy Act regulations, to communicate with physicians in Des Moines and Iowa City.

Officials of Planned Parenthood of the Heartland say the system allows the organization to more effectively serve women in rural areas without compromising safety.

“The process for a traditional medication abortion and an abortion via telemedicine are exactly the same with the exception of the physical location of the physician,” Angie Remington, a spokeswoman for Planned Parenthood of the Heartland, said in an interview with The Daily Signal. “Medication abortion gives a woman who is still early in her pregnancy the option to end the pregnancy safely and closer to her home.”

Remington said the physicians in Iowa City and Des Moines use their computers to remotely open a secure drawer at the health center, from which mifepristone—an abortion-inducing drug approved in 2000 by the Food and Drug Administration—is dispensed.

The physician, via webcam, and Planned Parenthood of the Heartland clinic staff in the room watch the patient take the medicine. Then, staffers give her a second medication—misoprostol—and the physician provides instructions on how to take it at home within 24-48 hours. This is known as a chemical abortion.

Others question the safety of the procedure. Mallory Quigley of the Susan B. Anthony List told The Daily Signal the court’s decision means women will be “denied the courtesy of an in-person visit from a doctor, even as their health and safety is put at risk.”

“Chemical abortion is dangerous and abortion facilities endanger women by sending them away with substances known to the FDA to cause hemorrhaging, bleeding, sepsis, even loss of future fertility—with no doctor nearby,” Quigley said.

In 2013 the Iowa Board of Medicine passed standards that require physicians to perform a physical examination of the patient in person and to be with the patient when the abortion-inducing drug is taken.

Planned Parenthood of the Heartland took the Iowa Board of Medicine to court over the new standards. A lower court upheld the regulations before the Iowa Supreme Court struck them down.

Mark Bowden, executive director of the Iowa Board of Medicine, said the board has not decided whether to appeal the court’s 6-0 decision.

“There are some deadlines that will drive the board to either make a decision to do something, or the board could choose not to do anything at all and the deadlines would pass,” Bowden said. The board has met three times in the past couple weeks for closed discussion on legal strategies.

The board had 14 days after the ruling to file for a re-hearing in Iowa and 90 days to file for an appeal and seek judicial review in the federal court system, if the case is eligible. Such eligibility is “yet to be known,” Bowden said.