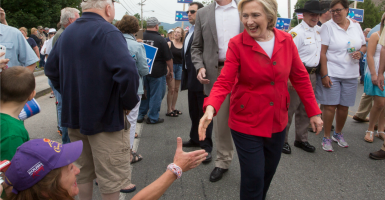 A fondness for iced tea and a struggle with a fax machine figure in much of the media attention to newly released emails sent and received by Hillary Rodham Clinton during her first year as secretary of state.

Serious foreign policy questions, however, also crop up in the 3,000 pages of Clinton emails. They are the first of monthly batches of the approximately 55,000 pages to be released by the State Department under court order.

Here are just nine of the policy questions raised in official messages released last week that, rather than on a government email system, were sent over Clinton’s personal email account and stored on a private server:

Warning of trouble in Afghanistan. One of Clinton’s former campaign aides, Mark Penn, writes her in September 2009 about the danger of what he calls President Obama’s “lack of a clear Afghanistan policy.”

Penn urges that a Clinton speech not minimize the strength of the Taliban, arguing that the idea of letting up on the Islamic radicals militarily “defies the imagination.” It would make the Obama administration “vulnerable to losing moderate support and seeming weak and indecisive,” he adds.

I can’t tell if anyone is listening to Obama at [the United Nations], but the lack of clear Afghanistan policy is unwinding the [anti-terrorist] coalition and threatens to cause a massive deer in headlights problem for [the] administration if not resolved soon.

Clinton passed along Penn’s remarks to aides, suggesting that they “overlook the source” but concluding Penn’s “idea that I should do a topper on timely events and make [the] case is probably right.”

In other emails related to turmoil in the Middle East, The New York Times report noted, Clinton asked aides whether the State Department could assist in such individual cases as Christians threatened by Islamic extremists in Iraq; a 10-year-old girl in Yemen who said she was oppressed; and a Turkish Kurd fearful of being sent home to be tortured.

When reporters inquired whether Biden had overshadowed the secretary of state, Clinton aide Jake Sullivan assured a department spokesman in an email that Clinton would be “back in Iraq before long.”

“Read traffic all the way down,” Mills writes, directing Clinton to the bottom of the email thread and White House press secretary Robert Gibbs’ statement that Biden would “oversee” Iraq policy.

A strained relationship with Britain. One of of Bill and Hillary Clinton’s longtime confidants, former journalist Sidney Blumenthal, was not an employee of the U.S. government. However, Blumenthal emailed observations to the secretary of state on topics ranging from Iran, Afghanistan, and Libya to China’s role in global warming and the CIA’s “enhanced interrogation” techniques.

One of Blumenthal’s most impassioned emails, however, was devoted to concerns over what he describes as the “shattered” condition, under Obama, of the long-standing “special relationship” between America and Great Britain. Passing along sources’ opinions to Clinton, The Guardian notes, he argues:

Consensus across the board in Britain—center, right, left—is that the Atlantic alliance—the special relationship—the historic bond since World War II—is shattered. There is no dissenting voice, not one, and there are no illusions. Opinion is unanimous. The bottom line is that the Obama administration’s denigration of the U.K. is seen as the summation of the Bush era.

In it, Blair seeks to arrange a meeting between the secretary of state and persons in Qatar with whom she has “built up a good relationship.” Blair writes:

[Redacted] has approached me privately saying they are keen to get their relationship with the USA onto a more positive footing and she was hoping for a ‘women to women’ one to one private meeting with you. She is happy to come to Washington if you could make some time available.

Is this something you would be prepared [t]o do. [Redacted] is someone who has real influence and she has made a lot of difference already with her [redacted] and with the [redacted] in which I am involved as the [redacted]. I am sure the conversation would not be confined to these issues but would be about the U.S./Qatar relationship generally.

Striking the right themes in Germany. The Wall Street Journal reports that Blumenthal also informally advised Clinton in November 2009 on what to say in speeches during a trip to Berlin:

The themes I stress are these: the importance of Berlin and the Brandenburg Gate as symbols of freedom; the weight of history (always felt by Germans); the contribution of the U.S. and the salience of the Western alliance; the meaning of [the fall of the Berlin Wall in] 1989 to today and especially the continuity of the Western alliance; and segue from past to future.

Getting personal advice on Israeli relations. The Guardian’s Washington bureau chief, Dan Roberts, singles out an email from an old friend of Bill Clinton’s who appears to urge the secretary of state to take a meeting with Israel’s ambassador to the U.S.

Brian Greenspun, college roommate of Bill Clinton, lobbies Hillary hard: “Israeli ambassador has been trying to meet with you to no avail.”

I trust I am not violating a protocol, but word has it that the [I]sraeli ambassador has been trying to meet with you to no avail. I wanted to make sure you knew that was a belief being shared.

I can’t imagine why your folks would want to keep you two apart. I hear he is solid. So, that’s the heads up. I am always available if there is a problem with which I can be helpful.

Projecting toughness on Cuba. A senior Clinton aide, Philippe Reines, prepared the secretary of state on how to frame an expected vote by the Organization of American States to let Cuba resume its membership, which OAS had suspended decades before.

In late May 2009, Raines urges Clinton in an email that State “set the expectation now that the outcome is likely to not go our way,” so that any positive outcome would be seen in the media “as a significant victory.”

Clinton followed through after attending part of an OAS meeting in Honduras before the group voted to end Cuba’s suspension, writing aides on June 3: “CNN is reporting this as being done against my wishes. Any way to salvage?”

Reines responds that the outcome is not as “dire as it seems,” in part because reporters soon would be distracted by their “blanket coverage” of Obama’s speech the next day on the Middle East.

In an interview with Fox News host Greta Van Susteren, Mother Jones reported, Clinton indeed went on to maintain that Cuba did not win immediate re-entry into the OAS. She said:

Unlike what some had hoped, to have a kind of fait accompli, we were able to create a consensus that the majority of countries in the OAS agreed with the United States.

How diplomacy works HRC-style: “Saud asked if we objected to their making a grant to Cuba for development in health. [please] run the traps”

Just one more question. Clinton sometimes peppered aides with questions to help her grasp the gist of an issue at hand. In an email dated July 25, 2009, she asks:

Is the 50k figure State and AID?

Can you find out for me how many Nazi prison camps we had in US during WW2 and what we did w the detainees—did we ever try any? Did we deport them after war ended?

Re Sudan: how do you pronounce Abyei?

What is % and dollar increase in 2010 budget for ops and aid?

I don’t understand the answer to the prostitution policy question. What’s the simplest way to say it?

So, ‘what does it mean?’ In one April email, Clinton betrays a sense of humor about the shifting bureaucratic gobbledegook attached to some alliances. The Guardian recounts her exchange with Sullivan:

Sullivan: I’m being told—and still trying to verify—that as of last week, we’ve succumbed to the Europeans’ preferred term. That there was interagency discussion of this, and that going forward, we will join the rest of the world in calling the P5+1 the E3+3.

Clinton: What does it mean? What is the E and who are the three?

Sullivan: And I feel ashamed that I had to subject you to this.

Clinton gave an assurance earlier this year at a press conference that none of her emails contained classified materials. Nonetheless, the State Department withheld 25 emails from the initial batch as having sensitive content about U.S. diplomacy or foreign governments.

“The occurrence of a subsequent upgrade [to classified status] does not in itself mean that anyone did something wrong or violated the law when they sent or received this information,” State Department spokesman Alex Gerlach told reporters.