The Rough Road to Reaching a Deal With Iran 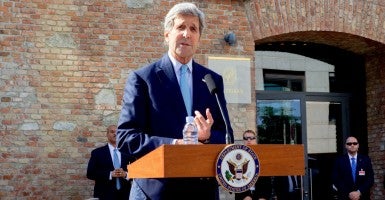 Funny how painfully sobering Monday mornings can be—for a whole host of reasons—but especially after a long, holiday weekend such as Independence Day.

For instance, over the Fourth of July break, there was word seeping out from the Iran nuclear talks in Vienna—to anyone paying attention to anything but friends, food and fireworks—that a deal was finally within grasp of the parties.

By Monday morning, the tone had shifted significantly from sunshiny to stormy with not only the possibility that the talks would blow through the July 7th deadline, but which also included warnings that Washington may walk away from the negotiating table.

The prospects for a deal by Tuesday look problematic.

News reports from Vienna indicate that there are still a number of rough patches on the road to an agreement between Iran and the P5+1 (United States, France, Britain, Russia, China and Germany).

These include hot button issues such as pace and scope of sanctions relief for Iran, the allowable scope of research and development for Tehran’s nuclear program, the depth and breadth of any inspection and verification regime, and questions about Iran’s prior work on a nuclear warhead, among others.

To complicate matters further, Iran is pushing for punitive economic sanctions to be lifted on their ballistic missile program in addition to the sanctions placed on Tehran due to its nuclear transgressions.

As if that isn’t enough, Tehran is asking for an end to the weapons embargo put on Iran, which is deeply troubling considering its support for the terrorist group, Hezbollah, the Syrian regime and its regional aspirations.

If the talks do not reach an agreement by Tuesday, current legislation requires that Congress get not a 30-day look at the deal, but 60 days instead for briefings and hearings before the pact can be implemented by the administration.

Of course, getting a nuclear deal with Iran doesn’t address the plentitude of other problems we have with Tehran including its Middle East meddling and staunch support for international terrorism.

There’s good reason to be alarmed that the deal we’ll get in Vienna will be a bad deal, especially if the United States and its partners cave to Iran to close the deal.

To investigate this further, join us Tuesday, July 7 at 12:00 p.m. as the Hudson Institute’s Michael Doran, former undersecretary of State, Amb. Robert Joseph, and The Heritage Foundation’s Jim Phillips look at the risks, rewards—or ruin—that might come out of an agreement in Vienna with Iran.