Welcome to John Roberts’ America, Where Words Mean Nothing 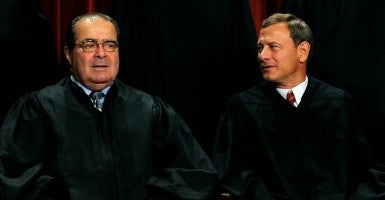 Supreme Court Justice Antonin Scalia’s lament last week that “words no longer have meaning” got me to thinking. I don’t claim to know Chief Justice John Roberts’ motivations in deciding in favor of Obamacare, but I do know that his deconstruction of the meaning of language is increasingly commonplace in our culture. Could his willingness to bend the meaning of the word “states” indicate something larger than what’s happening to the law? Could it actually be a sign of a major cultural shift in the country?

Welcome to postmodern America. For decades now, we have been living in a culture where the meaning of words is stretched almost beyond recognition. “Metanarratives” ring truer than actual facts. Self-prescribed identities trump everything, including nature. A white woman can blithely claim she is black, but when challenged, the only thing she can muster in her defense is irritable confusion and a declaration of how she “identifies.” A man announces he’s a woman and is celebrated as a hero.

Chief Justice Roberts may have had legal and political reasons for ignoring the common usage of words, but it is hard to escape the conclusion that, like so many others in our culture, he felt that being a stickler for a word’s actual meaning was just pedantic, a trivial matter when compared to the importance of some larger cause—in his case, delivering what he thought Congress really intended.

And why should we blame him? After all, if the prevailing wisdom says that a person’s gender or race is what he or she says it is, then why fuss over the meaning of the word “states”? Words mean what we say they mean, right?

For quite some time our intellectual classes have told us that truth lies only in the interpretation of language. Under the spell of postmodernist philosophers like Jacques Derrida and Michel Foucault, our scholars have been deconstructing language and society for decades. The result is that today many people don’t care what others think a given word means.

But there is a problem. If white literally means black, which used to be dismissed as a kind of joke, then who’s to say that anything, including what Rachel Dolezal or Bruce Jenner believe, is true? What and who is to separate reality from delusion? If reality is truly relative, then Dolezal’s parents’ word about her white identity is just as good as Rachel’s. The whole debate is nonsensical, and yet our media took it quite seriously.

All of which explains the current obsession with political symbolism. No matter what you may think of the Confederate battle flag, there is something weird about our fixation on it. You’d almost think that the flag itself marched into that Charleston church and killed those innocent worshippers. Yes, it’s a symbol of racial hatred, and for that reason alone it should not be displayed in ways that give offense. But surely we would be deluding ourselves if we were to think that banning every Confederate flag would somehow eliminate racial hatred in America.

The same is true for same-sex marriages. The Supreme Court may believe that all states must recognize it as a constitutional right, but that will not change how a majority of Americans involved in traditional marriages will see the “truth” of their own unions. An enduring reality will survive no matter how much courts or intellectuals try to change it.

Reality is not a Rorschach test. Sometimes a cigar is a cigar. We may think that we can change the meaning of words and institutions at will, but in the long run an undertow of reality brings us back to earth.

Friedrich Nietzsche, the philosopher of the “will to power,” once said, “All things are subject to interpretation [and] whichever interpretation prevails at a given time is a function of power and not truth.”

So true. Last week the Supreme Court chose power over truth—and the meaning of words—twice.