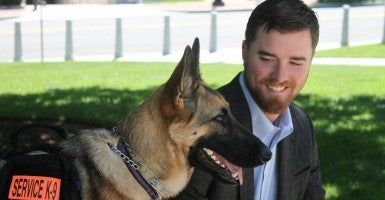 When former Marine Corporal Cole Thomas Lyle returned from his 400-day deployment to Afghanistan in November of 2011, he had never given much thought to post-traumatic stress. Eager to return to normalcy, Lyle attended a Rangers baseball game with his closest friends, the tickets a gift from his relieved mother.

Standing proud as the National Anthem reverberated throughout the Texas stadium, Lyle suddenly heard celebratory fireworks explode above. Before he could even process why, he had instinctively dropped to the ground in the middle of the crowd, covering his head with his arms. It was the first indication that something might be wrong—that Lyle might be facing the mental illness, characterized by flashbacks, nightmares, emotional numbness, and hyper-vigilance.

He soon participated in a Post-Deployment Health Assessment and was diagnosed with PTSD. His doctor prescribed him a mixture of anti-depressants and sleep aides. He took them dutifully, and began working with a psychiatrist. Neither treatment program helped.

It wasn’t until a third option became available over two years after he was first diagnosed that his life began to change for the better. The Veterans Administration informed Lyle that a service dog was his last option, so he turned to a private organization to secure his own service dog. Soon after, a spunky German Shepherd named Kaya soon became his constant companion, and his lifeline.

“I don’t understand why that wasn’t the first option,” Lyle says.

According to the Pentagon, more than 155,000 U.S. troops suffer from PTSD. That’s roughly 11 to 20-percent of Operations Iraqi Freedom and Enduring Freedom veterans.

People who have the disorder often encounter a host of other problems as a result, including depression, anxiety, employment issues, alcohol or drug addiction, and relationship strains that can sometimes result in divorce.

“Not only is there a huge strain on the service member, but also on the family and on the close friends of the service member,” explains Luke Coffey, Margaret Thatcher Fellow at the Davis Institute for National Security and Foreign Policy at the Heritage Foundation and himself a veteran. Coffey, who works on these policy issues, knows first-hand that post-traumatic stress disorder can negatively impact effectively every aspect of a veteran’s life.

Although veterans who served in combat seem the most likely to develop PTSD, servicemen like Lyle who may not have had those direct combat experiences can still be diagnosed, isolation setting in as they become further removed from the support system that surrounded them in the military.

“[Returning home] is a shock, even if you never served in combat,” Lyle says. “That has a detrimental effect mentally. If you add the problems of post-traumatic stress and acute anxiety, it just exacerbates those problems dramatically.”

These difficult issues become much worse when veterans conceal their struggles. According to Coffey, veterans remain afraid that despite decreasing social stigma about mental illness, some still see PTSD “as a sign of weakness, not an illness.”

This shame and hesitation to seek medical help has led to an increased suicide rate within the U.S. military since 2001. In 2012 alone, nearly 350 service members took their own lives, exceeding the 295 members of the Armed Forces who were killed by enemy fire in Afghanistan during the same year.

“Dogs help their handlers to live the lives they once did.”

Despite the hardships that many veterans face at the end of their service, some, like Lyle, have overcome mental illness with the help of the invaluable addition of a service dog. A service dog wears his handler’s hat at a training session. (Photo: Courtesy Canines for Service)

Service dogs, trained with specialized skills, assist the veterans they’re assigned to in a variety of ways depending on their handler’s needs. A veteran struggling with being in large crowds may be paired with a service animal trained to create a distance between the veteran and other people. Similarly, service dogs may post behind a veteran’s back, alerting them when someone is coming up behind them to avoid panic.

Service dogs like Kaya can be trained to pop around corners before the veteran does to make sure that nobody is standing there.

“That’s peace of mind,” Lyle said. “In the course of a vet’s service, sometimes they’ll have to turn a corner real quick and there will be somebody hiding there that’s waiting to shoot at you.”

Veteran service dogs can also do more general day-to-day tasks like reminding a veteran to take medication, searching the house when they return home, and even turning on the lights. In short, according to the American Humane Association, “The dogs help their handlers to live the lives they once did.”

Kaya is also especially trained to help Lyle deal with recurring nightmares. Each night, she will jump in bed or lick his hand to wake him up if he appears to be suffering from one.

Due to the sheer volume of agencies around the world, training practices differ among organizations. At Canines for Service, an ADI accredited agency that places service dogs with veterans, the average service dog receives about 2,500 hours of training. Training ranges from basic obedience and socialization to more advanced skills addressing specific disability needs. Pat Hairston, the Program Manager at Canines for Service, says the key to training a service animal is consistency and reward, and that a dog could practice a complicated, multi-part task up to 100 times before learning it.

“People think that you can train a dog and ask it to do something one or two times and it knows it,” Hairston said. “If you get a [service] dog like that, truly you’ve been given a gift.”

Before the training begins, service dog agencies must evaluate possible dogs to ensure that they possess the qualities to make a good working dog. While certain breeds like labs are preferred by many agencies, the key is that the animal has the right kind of temperament—specifically, that they are more interested in people than in other animals.

Canines for Service also administers a 15-point test to determine how a dog will react to certain things. If the animal is afraid of loud noises or jumps when an umbrella opens, for example, it’s not suited for service work.

“The reality is, when they go out to Walmart and it’s crazy noisy, [some dogs] are not going to be able to handle it,” Hairston explains.

Not enough pups to go around

While Hairston admits that the exact number of veteran service dogs that are working is “uncaptured,” ADI does know for certain that there are less than 100 new service animals placed with veterans every year. When compared to the 1,000 veterans diagnosed with PTSD each week, it is obvious veterans seeking service animals are working with an enormous deficit.

Moreover, considering the evaluation that goes into selecting a service dog and the thousands of hours of training that follows, it comes as no surprise that cost is often an inhibitor for veterans seeking a companion dog. What is surprising, though, is just how steep the price tag of a service dog is: between $15,000 and $20,000, according to McCullough. Many nonprofit organizations are dedicated to helping veterans overcome the cost, should they be able to locate a dog to pair them with. Groups like Canines for Service offer the dogs to service members free of charge, while the American Humane Association offers grants to offset adoption and training costs.

Unfortunately, nonprofits face real budgetary constraints of their own.

“Right now we have 11 dogs in training,” Hariston explains. “Multiply that by $25,000. That’s what it takes to run a budget to be able to train the service dogs and have them ready for our veterans.”

Because these organizations rely on donations and grants, the impact of their reach has its limits.

Welcoming a change to the VA service dog policy

While the United States Department of Veterans Affairs contributes to costs for service dogs trained to assist with physical disabilities, they do not currently provide service dogs to veterans with PTSD and other mental health conditions. The primary reason for this is the lack of research on the topic.

“It’s the lack of evidence that’s showing that service dogs are helping in some quantifiable way,” McCullough says. “Not just ‘Yeah I feel better, I like dogs!’ They want some hard measures.”

To account for this shortcoming in the research, Congress mandated in 2010 that the VA conduct a study to investigate the impact service dogs have on mental health. After two early setbacks, VA researchers finally began the three-year study earlier this year. Using a rigorous design and tight standards for service dogs, the study aims to enroll 230 veterans with PTSD from three regions in the U.S.

Dr. Patricia Dorn, director of VA Rehabilitation Research and Development, said that the revised study meets a high bar in terms of its ability to generate reliable scientific evidence.

“The findings of the study should give VA a solid basis for making decisions about the provision of service dogs for veterans with PTSD,” Dorn says.

Positive findings could change the VA policy of providing service dogs only to veterans with physical disabilities rather than ones with mental health issues. Lyle checks his email while Kaya stays by his side, giving him peace of mind. (Photo: Chelsea Scism/The Daily Signal)

In the meantime, the American Humane Association continues to lobby for an increase in service animals they believe are in fact effective in helping with physical as well as mental health needs.

For his part, Lyle cannot imagine having come this far in his recovery from post-traumatic stress without Kaya’s help.

“Even three, four, five years go by, and you think about that stuff, and it is, I mean, it’s as fresh in your mind as if it happened yesterday,” Lyle says, recounting the events in Afghanistan that contributed to his post-traumatic stress.