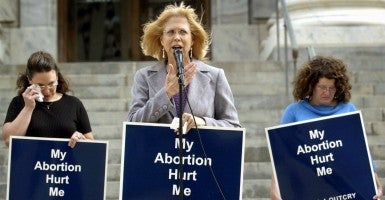 After being temporarily delayed by a judge, a Florida law that institutes a mandatory 24-hour waiting period before undergoing an abortion went into effect on Wednesday.

House Bill 633 was signed into law last month. The legislation requires an abortion provider to meet with a woman seeking an abortion for a consultation appointment at least 24 hours prior to her procedure.

Lynda Bell, the president of Florida Right to Life, told The Daily Signal that “a 24-hour waiting period makes sense.”

She said that a waiting period “not only protects women and young girls from making a rash decision at a very difficult time, it could protect them from being pressured into abortion from much older boyfriends, or others who are trying to coerce a young woman into a procedure that may affect them for the rest of their lives.”

“Twenty-five other states have similar waiting periods. A few have 48 and more hours before acquiring an abortion,” Bell said.

After the law’s passage, the ACLU of Florida and the Center for Reproductive Rights filed a lawsuit claiming that the law was in violation of the right to privacy guaranteed in Florida’s Constitution.

On Tuesday, Leon County Chief Circuit Judge Charles Francis issued a temporary injunction one day before the law was scheduled to go into effect.

Florida Attorney General Pam Bondi’s office appealed Francis’ injunction in the First District Court of Appeals, prompting a stay on the ruling, and allowing the law to go into effect.

The Associated Press reports that the case has since been “transferred to a new judge on Wednesday as part of an annual rotation of judges.”

In a joint statement, the ACLU of Florida and the Center for Reproductive Rights praised the judge’s injunction order.

Nancy Abudu, legal director the ACLU of Florida said that “we are very pleased that the court saw this law for what it is: An unconstitutional attack on the right of Florida women to make their own choices about their health care, including abortion.”

Autumn Katz, a staff attorney for the Center for Reproductive Rights, said that “we will continue to fight this demeaning law until the courts permanently strike it down.”

After Bondi’s appeal, both groups vowed to keep fighting the law.

Florida Right to Life’s Bell said that it’s “ironic” that opponents of the measure often support similar waiting periods for other services.

“The irony from the pro-abortion industry and the ACLU is they do not object to waiting periods to purchase a gun, marry or divorce,” Bell said. “In fact, D.C. is considering a new rule to require a 24-hour waiting period before getting a tattoo. They surmise that too many get them on a whim and later regret them!”

“Before performing almost any surgical procedure, doctors sit with the patient, explain the procedure, tell the patient to schedule an appointment with their primary physician, where they have a check up, blood work, sometimes chest x-rays and EEG’s,” Bell said. “They then schedule the surgery for a later date.”

Bell promised her organization will “continue to fight” for “women, young women and girls.”