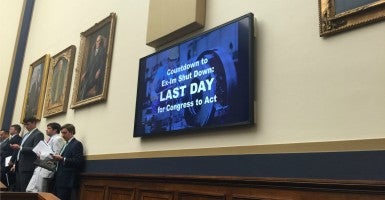 The Export-Import Bank’s charter expired June 30, and members of Congress—who are home for a week-long recess—have run out of time to reauthorize the bank. (Photo: Melissa Quinn/The Daily Signal)

Even though the 81-year-old agency has expired, supportive lawmakers may include an amendment concerning the bank to a must-pass bill like the Highway Trust Fund in an attempt to revive it.

While supporters say the bank helps American small businesses compete globally, opponents of the bank have called it a form of “corporate welfare” and an agent of “cronyism.”

As the expiration date for the bank neared, supporters and opponents were particularly vocal about the issue, stating their views on social media outlets like Twitter.

Here are some of the top tweets concerning the Ex-Im Bank:

Congress should pass my bipartisan bill with @SenatorHeitkamp that reauthorizes and reforms #ExIm in order to keep jobs here in America.

#ExIm expires tonight, which is good for the American people, because #cronyism and corruption go hand in hand https://t.co/UNoecOkR0x

We have the votes in both US Senate & House to reauth. #ExIm & I'm determined to find a path forward 2 reauthorize Bank as soon as possible

The Export-Import Bank charter expires tonight. Delta Airlines wins the battle of the business lobbies. Virtually all other businesses lose.

.@HouseGOP ignored biz owners & Members of their own party when they decided to #EndExIm at midnight. We need to reauthorize #ExIm4Jobs.