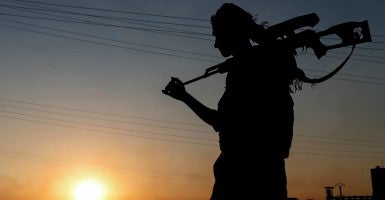 I hate to roust you from your well-deserved summer snooze, but I continue to get a sinking feeling about the threat of the Islamic State (aka ISIS, ISIL or Daesh) here in the homeland.

Understandably reluctant to lift your head from the hammock in the heat, you ask, “Why?”

Well, pass me your beach shovel and I’ll scribble some statistics here in the sand while you wipe the “sleepies” from your eyes induced by too many lobster rolls and fried clams.

First, we’ve now had nine—count ’em, nine—terrorist plots this year here in the United States, making the first nearly-six months of 2015 the most intense period of terrorist plotting since 9/11.

To put it into context, by our count at The Heritage Foundation, we’ve had 71 Islamist plots or attacks here in the United States in the nearly 14 years since Sept. 11, 2001, including the Fort Hood shooting and the Boston Marathon bombing.

Beyond the unprecedented number of plots so far this year, there’s another troubling trend.

It turns out that all of the plots in 2015 so far have had ties to the Islamic State of seemingly distant Iraq and Syria, whether the plotters’ ties be direct (recruited by ISIS) or indirect (inspired by ISIS).

Moreover, FBI Director James Comey said in February that his agency is investigating Islamic State-related cases in all 50 states, noting the power and pull of ISIS propaganda. This number of cases is still being referred to months later.

So it’s not surprising that the chairman of the House Intelligence Committee, Rep. Devin Nunes, R-Calif., told CBS’ “Face the Nation” on Sunday: “We face the highest threat level we have ever faced in this country today … including after 9/11.”

That’s chilling coming from someone clearly in the know.

Fortunately, the national and local law enforcement, homeland security and intelligence communities have done a terrific job in preventing these cold, killing conspiracies from becoming reality.

The down side is that if they don’t continue to “bat a thousand” as they’ve done so far this year—which in any endeavor is tough—we’ve got a problem, especially with an iconic American holiday like the Fourth of July coming up.

Maintaining that record of success against ISIS is not going to be easy.

Besides the rampant use of social media, the bad guys are upping their cyber game, using publicly-available encryption found on the Internet to chit-chat in complete privacy, according to news accounts.

The terrorists are also reportedly hiding their computer IP addresses to mask their identities and moving over to the so-called “dark web”—a “cyber commons” that lots of bad actors call home.

The fact is that terrorists are getting harder to identify and track and may even “go dark”—that is, they’re still out there communicating but we can’t listen in thanks to their cutting-edge cyber skills.

So despite our success in preventing attacks recently, we’re facing not only an uptick in plot frequency but an enemy who’s increasingly capable of reaching, radicalizing and recruiting those here who would do us harm.

Unfortunately, it could be a very hot summer—beyond what the weather brings.