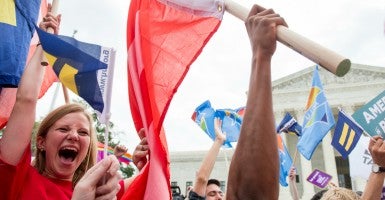 The Supreme Court ruled Friday same-sex couples have a Constitutional right to marriage in all 50 states. Justice Anthony Kennedy wrote the majority opinion in the 5-4 ruling. The decision prompted an immediate flood of social media reactions.

The scene outside of the Supreme Court a second after the decision pic.twitter.com/FGIbIbKk3x

“Today we can say in no uncertain terms that we’ve made our union a little more perfect.” —President Obama #LoveWins

All marriages at their root are about love. In America, our laws now recognize that simple truth. #LoveWins today & we couldn’t be prouder.

Marco Rubio’s position is essentially mine: Wrong decision; but now the law; let’s move on to protecting conscience. pic.twitter.com/gYrJYOUwaz

here’s where gay marriage is now legal in America pic.twitter.com/ZddygTYd3U

Supreme Court has legalized gay marriage. This battle in the culture war is over.

The rationale behind today’s #gaymarriage #supremecourt decision …as advanced by Thomas Jefferson. pic.twitter.com/YPce6gws7C

BREAKING; Amid all the terror & carnage, some good news: US Supreme Court just made gay marriage legal in all 50 states.

John Roberts in gay marriage dissent: “But this Court is not a legislature.” Not what you said yesterday, bruh.

How far we’ve come since the Pres Obama & Sen. Clinton ran against gay marriage in 2008! People can change. Never give up. #SCOTUSMarriage

I’m sorry, but I believe that marriage is between a man and a woman and that woman’s crazy Greek family.

WOW at the tone of this footnote in Scalia’s dissent. pic.twitter.com/ob3mm9c1UD

If you had told me in 2004 that America would have a black president, universal health care, and gay marriage by 2015, I would have laughed

I hope additional countries, including Israel, will follow in the footsteps of the United States and grant this basic right to all.

The cars on the uber app have little rainbows for scotus decision pic.twitter.com/2sko1b7SRj

This is not something news organizations do, is it? pic.twitter.com/oAtZxxmK5u