Does Obama’s New Hostage Policy Allow Negotiations With Terrorists? Details Must Be Clarified 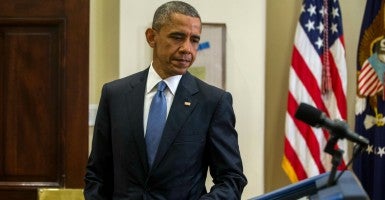 These actions are the result of an administration review of and report on hostage policy after several Americans had been taken hostage by ISIS and other organizations over the last few years.

In his speech outlining the changes, President Obama said that together, the directive and executive order included three components: (1) Updated policy by reaffirming the safe return of all hostages and that the United States government would not pay ransom for hostages; (2) better coordination and organization within the federal government, including the National Security Council and the FBI to address issues related to hostage recovery and services to family members, and; (3) changing how the government works with hostage family members and include them as “active partners” in the process.

The directive reaffirms several long-standing U.S. government policies, including (a) achieving the “safe and rapid recovery of U.S. nationals taken hostage outside the United States;” (b) our government will strive to “counter and diminish the global threat of hostage taking;” (c) that we will use all resources to get our hostages back; (d) that we will “make no concessions to individuals or groups holding U.S. nationals abroad” and; (e) that we will deny hostage-takers the “benefits of ransom, prisoner-releases, policy changes or other acts of concession.”

These reaffirmations are welcome news, and common sense policy.

Furthermore, there is merit to those new changes. The government should provide more communication, accountability and transparency to family members of hostages.

But we have some reservations about the manner in which the directive may be implemented.

First, we have the utmost sympathy for the families of those taken hostage. Obviously, we also have sympathy for the hostages themselves as we’ve seen the atrocities that groups like ISIS carry out against these innocent victims.

Families deserve compassion and care. Their government—our government—ought to offer honest, forthright and straight answers to the important questions they have.

For too long, families of hostages have been given inconsistent, insensitive and downright incoherent information regarding hostage situations from the federal government. This includes the Obama administration, as well as previous administrations. This is not right and to the extent to which our government can organize itself through executive action in order to create an office that harnesses the necessary elements of government to better inform and communicate with families, we think is good policy.

It is difficult to imagine what it must feel like to know your loved one is being held by a barbaric terrorist organization which demands exorbitant amounts of money for potential release. Nor can we comprehend what it must be like to have the government threaten prosecution under federal law for violating current statutes. These families feel further victimized by this system, and are understandably frustrated at the nameless bureaucrats who act in an uncoordinated way to address the most stressful situation in their life.

The directive and the executive order establish a Hostage Response Group (HRG) in support of the National Security Council (NSC) Deputies and Principals. The Hostage Response Group will be chaired by the special assistant to the president for Homeland Security and Counterterrorism. Furthermore, the president will appoint a special presidential envoy for Hostage Affairs, who will report to the secretary of state. That person will act as the lead diplomat for international engagement on hostage policy.

A new interagency Hostage Recovery Fusion Cell (HRFC), already in place at the FBI, will support the Hostage Response Group and act as the coordinating body at the operational level for the recovery of U.S. hostages abroad. The HRFC “shall coordinate United States government efforts to ensure that all relevant department and agency information, expertise, and resources are brought to bear to develop individualized strategies to secure the safe recovery of U.S. nationals held hostage abroad.”

To the extent that the Obama administration’s directive will work to eliminate the stress and confusion among families, provide a single point of communication to families, and have the power to make the interagency work together for families, it is a useful and long overdue executive action.

How the Directive Is Implemented Is Crucial

That said we have some substantive concerns about what the directive does not say, and in the manner in which it may be implemented.

It may seem cruel to apply this law in this context—what family of a hostage wouldn’t be inclined to want to meet the financial demands of the terrorist organization to get their loved one back?

But the law is on the books, and it serves, at least to date, to further an important policy: Not to allow people to enrich terrorist organizations because it will only incentivize those organizations, and other similar organizations, to take more American hostages. The fact that federal prosecutors have never prosecuted the family of a hostage is immaterial to the policy choice embodied in the law.

The directive is silent with respect to whether the administration, as a matter of policy, has decided to defer prosecution under Title 18 USC § 2339B of family members who pay ransom to designated terrorist organizations, despite the fact some news organizations reported that the order would contain a deferral mechanism.

As we’ve written in the context of health care and immigration, no president has the authority to re-write the law via executive order.  All legislative power is vested in the Congress, as defined by Article I, Section I of the United States Constitution.

If the Obama administration believes the law is wrong, it should urge Congress to act. We welcome debate on the merits of the current law as applied to family members who pay ransom to terrorist organizations.

However, repeal of that law is solely up to the discretion of the U.S. Congress, not the president who is charged with taking care that the laws be faithfully executed. We suspect that upon closer scrutiny, the Congress will not change the law and will conclude that encouraging or at least allowing families to pay hostage ransoms would likely increase the number of kidnappings, creating more misery and pain to other families in the future.

As we have written here, here and here, the long-standing policy of the U.S. government not negotiating with terrorists is sound policy. President Obama reiterated that policy during his comments today, and in the directive, which is welcome news.

Whether it is the government or the individual families who negotiate with terrorists, the result can be damaging. History indicates that negotiations with terrorists to release hostages will encourage more kidnappings of Americans.

This poses a threat to all Americans, at home and abroad. Successful negotiations may free a hostage, but the terror organization is then able to use the funds extorted from the victims as a means to carry out further operations.

One only needs to look at what has happened in Europe to see proof of this, as some European countries have used government funds to meet the demands of terrorist organizations. As The New York Times explained, when European countries negotiate with terrorists to free hostages, it not only subjects citizens of these countries to the ongoing risk of being taken hostage, it also provides terrorists with funds to continue their terror related operations.

There is a significant difference, however, between facilitating communications and facilitating negotiations.

The U.S. government should maintain the policy position of not negotiating with a terrorist organization.  But there are sound reasons to establish communication with hostage takers, i.e. establish proof of life and keep hostages alive until a rescue operation can be staged.

To the extent this directive aims to support improving communication between the U.S. government and families through the fusion cell but remains strong on no negotiation policy, we think that the directive has merit.

If, on the other hand, the directive is intended to act as a back door way of negotiating with terrorist organizations, we have sincere concerns.

The directive is also silent with respect to whether the government will now facilitate ransom negotiations between families and hostage takers in contravention of express U.S. government policy. To the extent the administration implements the directive to allow or facilitates ransom negotiations to take place between families and hostage takers, for example under the guise of “communications,” we have serious concerns.

The administration’s hostage policy directive in part, as written, reaffirms common sense and long-standing U.S. government hostage policy. It acknowledges that our government can and must do better by the families of those whose loved ones have been taken hostage. How this directive will be implemented in the future, however, remains to be seen.