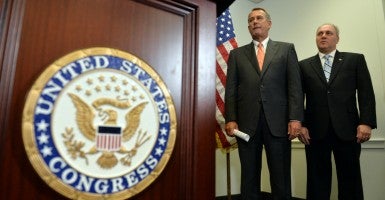 Conservative lawmakers serving as subcommittee chairmen are finding themselves on the receiving end of retribution from House leadership for defying party leaders.

Last week, 34 Republicans broke from their party in voting against a routine procedural rule that would have advanced Trade Promotion Authority. Since then, GOP leadership has come down hard on those members, removing some from the leadership team and threatening others with losing subcommittee chairmanships.

This show of force from leadership has angered conservative lawmakers and members of the House Freedom Caucus, who are speaking out against the “culture of punishment and fear” that’s emerged during John Boehner’s tenure as speaker.

“Conservatives are frustrated that they are being punished for voting their conscience after countless efforts to work openly with leadership were stonewalled,” a conservative staffer in the House told The Daily Signal.

“Conservatives are frustrated that they are being punished for voting their conscience after countless efforts to work openly with leadership were stonewalled,” said a conservative House staffer.

Rep. Mark Meadows, R-N.C., was removed from his role as chairman of the Government Operations subcommittee. As The Daily Signal previously reported, Rep. Jason Chaffetz, chairman of the House Oversight and Government Reform Committee, approached Meadows last week and presented him with two options: resign as chairman or be booted from the role.

Meadows, though, isn’t the only subcommittee chairman to be approached by committee heads following their vote against the procedural vote.

A second Republican staffer told The Daily Signal at least one other conservative member has met with the chairman of the member’s full committee, where the topic of the procedural vote came up. The meeting, though, did not result in the loss of the chairmanship.

>>> Mark Meadows to Fight GOP House Leadership: ‘Sometimes You Have to Make Changes to the Coach’

The staffer said members are concerned with leadership’s process, a sentiment Meadows echoed, and feel they shouldn’t “be forced to vote with leadership and against their constituents.”

A spokesman for Boehner did not return The Daily Signal’s request for comment.

In the wake of the procedural vote on Trade Promotion Authority, Reps. Trent Franks of Arizona, Cynthia Lummis of Wyoming and Steve Pearce of New Mexico were removed from the GOP whip team. The members each defied House Republican leadership in voting against the deal.

Pearce told The Daily Signal he had a “moral problem” with leadership asking him to support moving the trade legislation forward.

Since his ouster, Meadows, a member of the conservative House Freedom Caucus, has been publicly speaking out against GOP leaders’ tactics.

“There is no honor in bowing to a bully,” he said. “There is only honor in fighting a good fight—win or lose. This is not a fight I will back down from.”

Separately, members of the House Freedom Caucus—a conservative group with between 30 and 40 lawmakers in its ranks—will meet tonight to discuss how to respond to leadership’s retribution. There has been talk among members of blocking legislation backed by the party leaders, which would keep it from advancing through the House.

Over the last few years, 11 Republicans have been punished for bucking party leadership.

During the 113th Congress, Reps. Justin Amash of Michigan, Tim Huelskamp of Kansas, David Schweikert of Arizona and Walter Jones of North Carolina were kicked off their committees after they didn’t vote for Boehner to be speaker.

This year, Reps. Daniel Webster and Richard Nugent, both of Florida, were removed from the powerful Rules Committee after voting for other members during the speaker election in January.

Additionally, Rep. Rod Blum of Iowa, who also didn’t vote for Boehner, was denied a spot on the National Republican Congressional Committee’s fundraising initiative for vulnerable House members. His seat is considered competitive.