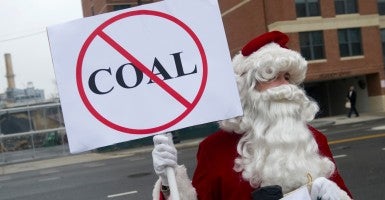 The EPA is working on regulations that could drive a final nail into the coal industry, which currently supplies almost half the nation’s electricity. (Photo: Chris Maddaloni/CQ Roll Call/Newscom)

On first glance, this is a rather routine story in the environmental policy wars.

A study published in the journal Nature Climate Change said researchers had found that if rules being considered by the Environmental Protection Agency to reduce carbon emissions were enacted, it would mean 3,500 fewer premature deaths per year.

This was a necessary piece of the puzzle for the EPA as it works to implement regulations it says would, by 2030, reduce carbon emissions to 30 percent below their levels in 2005. Industry experts say these regulations would drive a final nail into the coal industry, which currently supplies almost half the nation’s electricity. So, to justify the regulations, significant health benefits must be demonstrated.

Such stories have become expected in environmental policy. The government announces an aim or policy change, and the research community gets together, using taxpayer dollars, to confirm the government’s approach is the best option. Those who support it post it to their Facebook pages; those who don’t ignore it.

Researchers from Harvard University, Syracuse University and four other institutions used climate models to predict the impact the EPA’s proposed carbon emissions reductions would have on human health. And not surprisingly, it turned out the government’s plan was not just among the options that would produce positive results but was, in fact, the best way to achieve the goals.

But there was a line in this story that sets it apart. Jonathan Buonocore, a research fellow at Harvard’s Center for Health and the Global Environment, told U.S. News the EPA did not participate in the study or interact with its authors.

But it seems the agency did participate and did interact with the authors. Emails discovered through a Freedom of Information Act request by Steve Milloy, a former editor at JunkScience.com, found a string of correspondence to set up meetings and conference calls to, in the words of one such email, “discuss methods for our next set of analyses.”

Charles Driscoll seemed to grasp this when he told The New York Times it was “a coincidence” that one of the models so closely resembled the federal proposal.

Milloy does not buy that explanation, and he doesn’t buy that this research was not coordinated with the agency to maximize effectiveness in promoting the coal regulations.

Despite the fact the study’s authors “received or were involved in $45 million worth of research grants from the EPA,” The New York Times, The Washington Post and the Associated Press described the researchers “simply and innocuously” as researchers and scientists, Milloy lamented in a recent post at JunkScience.com. “Absent some unimagined explanation, these emails flatly contradict the claims [of independence] made in the Harvard and Syracuse media releases and in statements to media [by the researchers themselves].” The Daily Signal asked both the Harvard School of Public Health and Syracuse University if they stand by their characterization of the researchers as “independent” in press releases on the study. Neither responded.

The scientists who produce this government-favored research not only have begun to cash in at taxpayers’ expense, but they’ve also begun to ask the agency for help with fundraising.

Milloy uncovered an email in which Driscoll asks Ellen Kurlansky, an agency staffer, for her assistance and advice on raising money for another project.

“I wanted to see if I could arrange a short call with you to discuss fundraising [on a meeting related to mercury poisoning]. We are making some progress on the planning for this meeting, but it would help if I could raise a little money to help pay for some initial expenses.”

This coziness is not healthy, said David Kreutzer, an energy economics and climate change policy analyst for The Heritage Foundation.

“The science can be judged on its own, but the independence of the researchers is undermined when emails show they were soliciting funds from the EPA even as they were writing up their study reviewing the impact of significant EPA rules.” The government is not nearly so accommodating for scientists who don’t toe its preferred line.

Willie Soon, an astrophysicist with the Harvard-Smithsonian Center for Astrophysics, co-authored a paper published in January that found the models used in the U.N.’s Intergovernmental Panel on Climate Change are laced with mathematical errors. Soon then endured an avalanche of criticism of his funding sources and implications he had shaped his findings to please them.

It mattered not that he got only about $60,000 per year from the one “compromised” source or that the compromised source was the Smithsonian or that he had not known where the Smithsonian got the money it paid him.

Then, a few days after The New York Times piece on Soon appeared, Congress got into the act. Rep. Raul Grijalva, D-Ariz., ranking minority member on the House Natural Resources Committee, sent letters to seven universities asking for documents on climate change research connected with scientific skeptics who have questioned the premise of anthropogenic (man-made) global warming.

This was followed by a letter from Sens. Edward J. Markey, D-Mass., Barbara Boxer, D-Calif., and Sheldon Whitehouse, D-R.I., to 100 fossil fuel companies, trade groups, and other outfits “to determine whether they are funding scientific studies designed to confuse the public and avoid taking action to cut carbon pollution, and whether the funded scientists fail to disclose the sources of their funding in scientific publications or in testimony to legislators.”

Indeed, the deck remains stacked against those who dare to stray from the government message on global warming, and the conflicts of interest seem concentrated on the researchers and scientists who accept government money, according to William Happer, a professor of physics at Princeton University.

“Unless you accept the alarmist position and the dictates of the [Obama] administration, you cannot typically receive government funding,” said Happer.