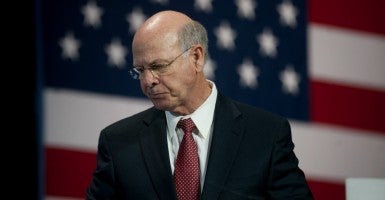 After being punished for defying House Republican leadership on a botched trade deal last week, Rep. Steve Pearce spoke exclusively with The Daily Signal about the “uncomfortable” situation that led to him being booted from the GOP whip team.

“I told our leadership I was very uncomfortable,” Pearce, R-N.M., said in his Capitol Hill office Thursday morning.

“I have a moral problem with this because you’re asking me to tell folks back home, not only did I vote against the [trade] package … but you’re asking me to say, I allowed you to bring it forward in a separate fashion knowing full well the intent afterwards.”

Pearce defied party leadership when he voted against a routine procedural rule last week that allowed a vote on Trade Promotion Authority to occur.

Trade Promotion Authority would leave Congress with the power to vote up or down on trade deals but with no ability to amend such deals. That authority would help President Obama more easily ink the proposed 12-nation Trans-Pacific Partnership with Pacific Rim nations.

In voting down the procedural rule—a rare move in Congress—Pearce said he knew full well that he could be kicked off the Republican leadership team.

“I know the ramifications and I don’t feel bad about that,” Pearce said. “It’s a long-standing rule if you’re on the whip team, you’ve got to vote for procedural things.”

Members of the whip team are responsible for coordinating and “whipping” up support for legislation.

House Majority Whip Steve Scalise, R-La., makes his leadership rules clear: Whip members are free to vote against them on underlying legislation, but must vote “as a team” on procedural matters.

“We’ve complained about [this political maneuver] when the other team does it,” Pearce said. “I just felt like it was something that I had to speak out against.”

Pearce said that while he’s in favor of free trade, the president’s plan “leaves us in the small states out of the picture.”

And he wasn’t the only one to feel that way: Reps. Cynthia Lummis, R-Wyo., and Trent Franks, R-Ariz., also voted against the procedural rule.

Both Lummis and Franks were also removed from the GOP whip team.

“Cynthia knew going into the rule vote last week that being a member of the whip team has certain parameters,” a spokesman for Lummis told The Daily Signal. “She understands his decision and departs the whip organization with nothing but the utmost respect for Mr. Scalise and his entire organization.”

Pearce says his day-to-day life won’t change much without being on the whip team, but that he won’t be privy to the “inside baseball” knowledge that being a member of the team affords.

“I won’t have that inside-the-room part,” he said. “But we’re still trying to be a part of the process to make our government better, more accountable, effective and efficient.”