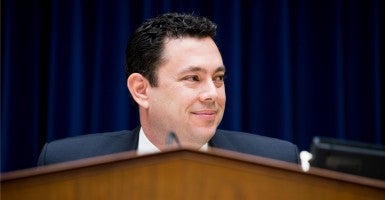 The Remote Transactions Parity Act would enable states to collect taxes on businesses that may not have a physical presence in the state, but permeate borders through online sales.

“The same person, buying the same good, in the same state should probably pay the exact same amount of tax,” Chaffetz, R-Utah, said in a statement.

States have grappled with various ways to collect Internet sales taxes following the Supreme Court’s refusal in 2013 to involve itself in state attempts to force online retailers to collect sales tax from consumers, regardless of whether that company has a physical presence in that state.

Congress has since tried to create a national standard that would unify conflicting state and local requirements.

Traditional brick-and-mortar stores have long argued online retailers, such as eBay and Amazon, have an unfair advantage because they are able to avoid charging a sales tax in most states, giving consumers a cheaper option.

“The current tax loophole skews the free market. It allows businesses that employ fewer people and contribute to the economies of fewer states to avoid collecting sales taxes,” Chaffetz said. “The RTPA would close this loophole in a way that is generous to small remote sellers and puts our neighborhood retailers on a level playing field.”

Chaffetz’s legislation builds on a previous Senate bill, the Marketplace Fairness Act, which passed the Senate but was quickly blocked by Republican House leaders. While his bill currently has 15 co-sponsors, many conservatives remain skeptical.

Chaffetz’s bill would also force states to provide remote sellers, companies selling to customers in a state where it does not have a physical presence, the software needed to determine the taxes owed to the state.

“The fact that it streamlines some of the audit requirements for the collection of these taxes does not begin to undo the harm it would cause,” Gattuso said. “It would place heavy burdens on small online business to collect taxes from over 10,000 different taxing jurisdictions.”

The online retailer Overstock is backing Chaffetz’s bill, aligning itself with Amazon in a push for Congress to create a federal standard.