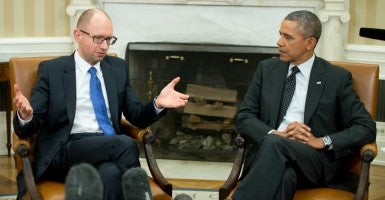 Military training is appreciated, but Ukraine needs more from the U.S. if it is to stave off Russia, its prime minister said in Washington this week.

Prime Minister Arseniy Yatsenyuk of Ukraine asked the U.S. for economic assistance as well as defensive lethal weapons to help Ukrainian troops push back the 10,000 Russian troops in the country.

So far the U.S. military has helped train these troops but has voided sending weapons for fear of escalating the conflict.

But Yatsenyuk said Russian President Vladimir Putin wants to extend Moscow’s reach deep into Ukraine and that many Ukrainians feel abandoned by the U.S. in their fight against Russia.

“This is the only language that Putin understands,” Yatsenyuk told The Washington Post. “We have to stay strong, not retreat.”

Daniel Kochis, a research associate with the Margaret Thatcher Center for Freedom at The Heritage Foundation, said, “The U.S. should give Ukraine a fighting chance to defend its territory from external aggression by providing defense weapons.”

Kochis said weapons alone will not solve the problem and any such aid should be “coupled with a wider strategy to counter Russian aggression and support Ukraine’s territorial integrity.”

In addition to asking for military assistance, Yatsenyuk and his finance minister Natalie Jaresko have met with International Monetary Fund officials and members of Congress to discuss solutions to Ukraine’s economic problems.

The prime minister has asked for loans from the IMF to help strengthen his country’s weak economy and stem its stubbornly high inflation. He also has asked to increase trade relationships with the U.S.

Kochis said that Yatsenyuk “hopes his visit will ensure Americans, especially policymakers, do not forget the crisis in Ukraine brought about by Russia’s invasion has not gone away.”