Think That News Story Online Is a Hoax? It May Be Written By Russian Propagandists 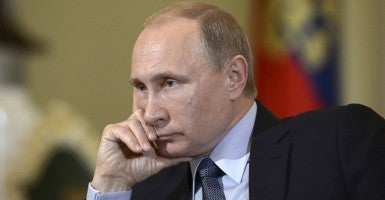 Did you ever hear the one about the Columbian Chemicals factory in Centerville, La., blown up by ISIS terrorists on Sept. 11? Possibly not—because it did not happen.

On Twitter and YouTube, however, such a “news story” did make the rounds, planted it appears by a St. Petersburg-based Russian propaganda outfit, innocently named the Internet Research Agency. The agency was created by Russian President Vladimir Putin. According to The New York Times, whose Sunday edition carried a detailed unravelling of the scam, it took the Russians months to prepare and orchestrate the deception.

The Columbian Chemicals fake is an example of the Russian government’s determination to get into the heads of Americans through the deployment of an army of hundreds so-called “trolls,” who prowl the Internet to spread disinformation and attack those who are deemed enemies of the Kremlin. Creating the hoax involved setting up fake Twitter accounts, commentary in Arabic claiming ISIS involvement, and fake Louisiana TV images on YouTube. For a few moments it had local people severely rattled.

The Internet Research Agency, housed in a non-descript bunker of an office building in St. Petersburg is a so-called “troll farm.” Its employees spend their days creating phony news stories, anti-American and anti-Ukrainian propaganda and engage in online harassment and endless arguments in comment sections of websites.

During a hearing of the House Foreign Affairs Committee in April, “Russia’s Weaponization of Information,” British journalist Peter Pomerantsev described Russia’s actions as an attempt to undermine the concept of objective reality itself. If you can put enough disinformation out on the web, you can create so much confusion that people distrust everything they read. Needless to say, this will also lead to paralysis and political inaction.

Under Putin, and especially since Russia annexed Crimea and fomented a secessionist rebellion in eastern Ukraine, Russian propaganda has surged to levels not seen since the Cold War. It includes not just the Internet Research Agency, but also RT (Russia’s global cable channel), Sputnik (a prolific Russian propaganda website) and funding for media campaigns in Europe.