The Real Trouble With Obama’s Rhetoric 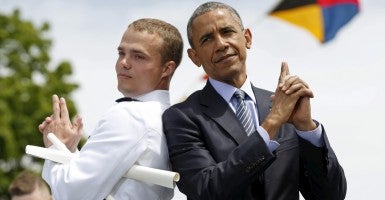 Since 2009, everyone has been waiting for a clear articulation of President Obama’s grand strategy. Indeed, careers have been made analyzing what this mysterious thinking might be.

The administration has of course released documents like the 2015 National Security Strategy. But regrettably neither the military community nor the defense civilian establishment takes seriously such generic and abstract documents, which contain polite clichés like: “To succeed, we must draw upon the power of our example—that means viewing our commitment to our values and the rule of law as a strength, and not an inconvenience.”

“Climate change constitutes a serious threat to global security, an immediate risk to our national security,” the president informed the graduating class of the U.S. Coast Guard Academy. This was among the strongest and surest statements he has made against any of our enemies.

Strangely, never have such decisive words been used about concrete, human adversaries such as Iran, Russia, or ISIS. Against human threats, no calls for mobilization, courage, or perseverance were heard. Rather, bureaucratic inanities like “dialoguing,” “resetting,” and “degrading” would take care of those problems.

But in fighting inhuman abstractions like climate change, the president is clear-minded and strong-willed. Against climate change, he has even said “we need to act—and we need to act now.” In fact, we are told, it would be “a dereliction of duty” to ignore it. The entire world must act and “make sacrifices for generations to come.”

Fighting abstractions is among the favorite rhetorical genres of this presidency. There are abstract enemies on the domestic front too: “The defining challenge of our time” is income inequality, another abstract force. By attributing evil to a statistic, the president gives the impression of a mysterious and cruel force subverting human happiness.

Readily discernable reasons lurk beneath the president’s rhetoric. Abstractions do not fight back. They do not fight back because they have neither will nor intelligence, and therefore glory is attainable without risk—and for all. Not everyone can fight ISIS—only the courageous. But everyone can struggle against income inequality and “combat” climate change. Since no genuine moral courage is necessary in fighting an abstraction, one will never face acting in harrowing circumstances.

Attaining glory in the cause of only one nation does not suit the cosmopolitan morality of our nation’s elite. Therefore the battle against climate change promises to save mankind itself: “Climate change will impact every country on the planet. No nation is immune,” the president said. Cosmopolitan causes make questions of either justice or strategy irrelevant. That is because abstractions, unlike ISIS or Iran, do not make arguments or claims on their own behalf, which muddy the moral waters and hinder universal conviction.

Appeals to fight climate change contain a mixture of two psychological extremes: First is the promise of nobility and glory for the victors and the believers. The second part is fear—fear of both world destruction, and fear that you will be personally or professionally destroyed if you disagree.

Another advantage is that one cannot be humiliated or undone by an abstraction. If income inequality isn’t “degraded” during his presidency, will Obama pay a price? Will he pay if the earth fails to cool and the oceans recede in the next two years? By contrast, surely there are consequences if Iran obtains a nuclear weapon and triggers an arms race in the region.

There are obvious and clear dangers in neglecting immediate security threats. While you allow those threats to grow unchecked, not only do adversaries’ ambitions grow proportionately to their weapons caches, but this growth means any response will require more force and sacrifice later on. Iran, Russia, and ISIS demonstrate this. Nonetheless, the real trouble with Obama’s rhetoric is that it encourages unseriousness in the American public when facing real threats. Fostering this habit of moral dishonesty in the public will likely be the president’s most lasting though least detectable legacy.