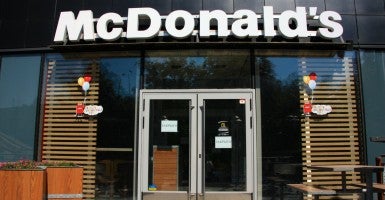 MARIUPOL, Ukraine—In 1995, New York Times columnist Thomas Friedman coined the Golden Arches Theory of Conflict Prevention, also known as “McPeace.” The idea was that countries stable enough economically and politically to court a McDonald’s franchise share too many democratic values to go to war with one another.

“People in McDonald’s countries,” Friedman wrote, “don’t like to fight wars. They like to wait in line for burgers.”

The theory didn’t last long. Four years later, residents of Belgrade could enjoy a Big Mac with fries from one of their seven McDonald’s restaurants as NATO cruise missiles and warplanes roared overhead during the 1999 Kosovo war. NATO pilots, upon returning to their bases in Italy, could go out for a post-mission Royale with Cheese. Subsequent conflicts between India and Pakistan, and the 2008 war between Russia and Georgia put additional nails in the McPeace coffin.

The Ukraine conflict is the theory’s latest blight. Kremlin officials can have lunch at the recently reopened McDonald’s on Pushkin Square, while lawmakers in Kyiv, using sidewalks still pockmarked with bullet holes from the 2014 revolution, can walk to lunch at the McDonald’s on the Maidan.

For the residents of the southern Ukrainian city of Mariupol, however, the shuttered McDonald’s restaurant on Prospekt Lenina is one of many examples of how the ongoing Ukraine conflict has interrupted normal life.

Yet, with the war still looming over Mariupol, on May 28 a group of residents launched an online petition to reopen their McDonald’s. “I consider returning McDonald’s to Mariupol to be a symbol of returning to normal life,” said Valeriya Korneva, one of the petition’s organizers.

Residents in Mariupol, Ukraine want to bring back their McDonald’s, which was shut down due to the war. (Photo: Nolan Peterson/The Daily Signal)

The Facebook post announcing the petition read: “Delicious, always fresh, and most importantly, the return of McDonald’s in Mariupol is a sign that everything is stabilized and normal.” At the time of this article’s publication, the petition had 122 signatures.

“I read the petition and understand the idea,” said Helen Popova, a native Muscovite and a university professor in Mariupol. “I can say I’m not in the least a fan of this ‘junk food,’ but being a symbol of a return to peaceful life, I’ve reluctantly signed it.”

The Mariupol McDonald’s was shut down on May 14, 2014 after separatists briefly took over the city. The establishment now sits abandoned with a taped note on the door announcing the closure was “for the safety of staff and customers.”

Some claim, however, that the threat of a permanent separatist takeover was a risk to the franchise’s bottom line. “The restaurant’s owners understood perfectly that if the DNR comes here, they will raid and ransack,” Korneva said, using the acronym for the Donetsk People’s Republic, one of Ukraine’s separatist territories.

“In Donetsk and in those places where the terrorists have taken over, businesses have been robbed and compelled to pay them,” she continued. “It’s a racket.”

In an emailed statement to The Daily Signal, McDonald’s spokeswoman Becca Harry said the closure was due to the logistical challenges created by the war as well as safety.

“Given the ongoing instability in the east of Ukraine, it has not been feasible for McDonald’s to guarantee the safety of our customers, employees and restaurant operations or the regular supply of products to our restaurants in Mariupol,” she wrote, adding that the Mariupol McDonald’s “will remain closed for the foreseeable future.”

Yevgeniya Denysyeva, a spokeswoman for McDonald’s in Ukraine, largely echoed her American colleague’s remarks, but also suggested the closure was not permanent. “As soon as the situation improves,” Denysyeva wrote in an email to The Daily Signal, “we are ready to consider the possibility to renew work.”

Following the Russian annexation of Crimea and the subsequent war in eastern Ukraine, eight Ukrainian McDonald’s restaurants were closed, including ones in Crimea, Luhansk, Donetsk and Mariupol. The Mariupol restaurant was the only one closed in a city that remains under Ukrainian government control.

Workers at the shuttered locations were offered jobs at other McDonald’s restaurants in Ukraine, McDonald’s said.

Mariupol had about 500,000 residents before the war began last year.

But there were multiple waves of mass exodus when the city was taken over by separatists and then retaken by Ukrainian forces in April and May 2014, when tank battles raged on the city’s periphery before the Sept. 5, 2014 cease-fire, and after a Jan. 24, 2015 Grad rocket attack killed 29 people in a residential neighborhood. Life in Mariupol has not changed much since the Soviet Union collapsed. (Photo: Nolan Peterson/The Daily Signal)

Throughout Mariupol’s turbulent past year, McDonald’s wasn’t the only business to leave. Prospekt Lenina is lined with shuttered restaurants, stores, and banks. But the empty McDonald’s is different, harder to overlook. It sits at the corner of the town’s busiest intersection and was one of the most popular places in the city to eat and hang out. For the residents of Mariupol, the American chain’s arrival symbolized how this industrial former Soviet city was finally becoming modern and Western.

Some older residents still privately reminisce about the Soviet days, when wages and pensions were more or less secure and they could be proud of their country’s importance on the world stage. But since the Soviet Union collapsed, many residents, including former Communist Party members, admit that they were duped by Soviet propaganda into believing that life in the USSR was the best of all possible worlds. A few trips abroad as well as exposure to foreign media and the Internet shattered those illusions.

Now, almost a quarter-century later, there is more disappointment. This time, with the unrealized promises of democracy and capitalism. For many people in Mariupol, life hasn’t changed much. Most still make less than $150 a month working factory jobs. The steel industry employs about 50,000 people in Mariupol. The city’s economic lynchpin remains the Ilyich Steel and Iron Works (named after Vladimir Lenin), which was founded in 1897.

For the older Soviet generation, the variety of food available at grocery stores is the true benchmark by which progress is measured. Even today, house party guests still bring bananas as a thank-you—a cultural leftover from when tropical fruits were as decadent as a good bottle of Burgundy.

When McDonald’s arrived, the Soviet generation initially complained the food was too unhealthy. Yet, for all the nutritional vacuity of a Big Mac, the restaurant became a social fixture. It’s where families went to celebrate birthdays and graduations, where nervous first dates happened, where friends went to meet on the weekends and young parents went for a night out when they found a babysitter. Unlike in America where the appeal of fast food chains is defined by convenience and affordability, in Mariupol, as in other Ukrainian cities, going to McDonald’s is a treat that shouldn’t be rushed.

Mariupol’s millennials, for whom the Soviet Union is a secondhand memory, are aware that life here still woefully lags behind European and Western standards. They see the outside world through social media and are consequently unimpressed by bananas—preferring iPhones and hookahs, or a bottle of Captain Morgan. They make tongue-in-cheek jokes about Mariupol’s beachfront, with its crumbling concrete seawalls and smokestacks lining the horizon, sarcastically comparing it to Santa Barbara, California—a place they have almost certainly never visited. Most have only been to Kyiv a handful of times in their lives.

So, for both young and old, the Mariupol McDonald’s was a symbolic step away from the Soviet past and toward a more hopeful Western future. Consequently, the restaurant’s closure last May, as separatists and Ukrainian forces battled for control of the city, was an equally symbolic symptom of life interrupted.

“We knew things were getting serious when they shut down the McDonald’s,” said Leonid Oksanichenko, who left Mariupol for Kyiv with his wife Nataly and their 4-year-old daughter Veronica after the January rocket attack.

“When it was closed a year ago, there were some worries that the city was going to be abandoned by the government,” he added. “But that hasn’t happened luckily.”

Mariupol’s residents have lived under the constant threat of invasion for more than a year. The sounds of heavy weapons and gunfire rolling in like thunder from nearby Shyrokyne barely raise eyebrows anymore.

Life has found a way to go on. The movie theater still shows imported American films, and university students sit in coffee shops studying for exams. On weekend nights, some of those students meet at the Sated Piano restaurant for burgers and hookahs. This popular hangout is in the bottom floor of the ruined city administration building, which pro-Russian separatists torched on May 14, 2014—the same day McDonald’s shut down.

Yet, the war is always there.

Spray-painted signs on the sides of buildings point to the nearest bomb shelter. The basements of most apartment buildings have been converted into bunkers, filled with emergency medical supplies, food and water. City hall and police headquarters remain burnt-out skeletons. Like Florida residents preparing for wind damage before a hurricane, windows are duct-taped to prevent shattering in a bomb blast.

Residents keep the trunks of their cars packed with a few days’ worth of supplies, clothes and documents like passports in case they have to flee in a hurry. Cars carrying children have white pieces of paper taped in the windshields.

The city’s airport and train stations have been shut down for months. The airport is now a military barracks, and the runway and surrounding fields are a mess of mines, concertina wire, tank barriers, trenches and machine-gun pillboxes.

The only mass transportation in and out of the city is by bus or taxi, requiring transit through checkpoints where soldiers wearing balaclavas and mismatched uniforms and armed with duct-taped-together Kalashnikov assault rifles deliberately thumb through the passports of nervous and obeisant military-aged males.

For those habituated to peacetime rhythms of life, these symptoms of war in Mariupol border on the apocalyptic, jarring the sensibilities of one who assumes that words like “Stalingrad” belong in the history books, not in metaphors describing what might happen to a European city in 2015.

For some, these realities of war are too much for the Golden Arches to overcome.

“I think it’s more like a way to push people to the thought that normal life is coming back, that Ukraine and normal life are synonyms,” Oksanichenko said. “As for me, it is nothing more. Bringing the restaurant back won’t change lots of things.”