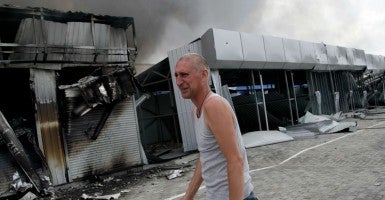 A man cries in front of his shop which was damaged Wednesday after shelling at a market in the outskirts of Donetsk, Ukraine. (Photo: Alexander Ermochenko/EPA/Newscom)

“There were many casualties. Krasnohorivka and Marinka are on fire,” Ukrainian Member of Parliament and Kyiv-1 Battalion Commander Yevhen Deidei wrote on his Facebook page Wednesday.

“Close combat is taking place along the front line,” he added. “The militants are going for a breakthrough.”

“The situation is under control,” Lysenko said. He added that 25 Ukrainian soldiers had so far been wounded in the fighting, with no fatalities. “It’s a miracle,” he said.

“We are not conducting offensive operations, we just take adequate measures against strengthening the genocide of the people of Donbas,” Basurin said, according to the Russian news agency TASS.

“DPR cities have been shelled by the Ukrainian army, not by battalions or other units,” he added, using an acronym for the separatist republic. “Only commanders of the Ukrainian armed forces can issue an order to open fire.”

There was widespread speculation throughout Ukrainian social media Wednesday as to whether the early-morning barrage was the beginning of a large-scale combined Russian-separatist offensive, which U.S. and Ukrainian officials have been warning about for months. A fireman puts out a fire at damaged shops after shelling Wednesday at a market in the outskirts of Donetsk, Ukraine. (Photo: Alexander Ermochenko/EPA/Newscom)

As of Wednesday afternoon, however, there did not appear to be concurrent attacks of similar intensity at other places along the contact line, leading the Ukrainian military to downplay fears of a major offensive. “[T]his attack is taking place on a narrow part of the front and therefore we currently cannot speak about a massive offensive by the enemy,” Lysenko said.

The heavy weapons allegedly used Wednesday are banned from the front lines, according to the Feb. 12 cease-fire, which is now in danger of complete collapse.

The attack comes one day after members of the Trilateral Contact Group on Ukraine, comprising delegates from Ukraine, Russia and the Organization for Security and Cooperation in Europe, were set to meet in Minsk to discuss the Ukraine conflict and the fragile truce.

The attack also precedes a June 7 meeting of the G7 in Germany. On the group’s agenda are sanctions on Russia due to its support for Ukrainian separatists.

The G7 comprises the world’s seven major developed economies, including Germany, the United States, Canada, Japan, France, the United Kingdom and Italy. Russia joined the G7 in 1998, making it the Group of Eight, but was dropped from the group last year after annexing Ukraine’s Crimean peninsula.

“Before the G7 meeting, Russia deliberately disrupted the trilateral meeting of the contact group yesterday, and today instructed its terrorists to launch a military operation,” Yatsenyuk said. His remarks were published on the Ukrainian government’s website.

Wednesday’s attack on Marinka followed a string of attacks across the contact line on Monday and Tuesday, with the heaviest fighting in Shyrokyne, 10 miles east of Mariupol, and around the separatist stronghold of Donetsk farther to the north.

Marinka is about six miles west of Donetsk. Separatists also attacked the village of Krasnohorivka, three miles north of Marinka, on Wednesday, according to the Ukrainian military. Ukrainian servicemen at a military training ground “Desna”, in the Chernigov region of Ukraine (Photo: Newscom)

Tanks and armored personnel carriers have been sent to reinforce Ukrainian units in the area, Kyiv said, and Ukrainian checkpoints into the separatist territories, which had been allowing civilians to pass, have been shut down.

In earlier interviews with The Daily Signal, U.S. military officials said there were no plans to pull U.S. soldiers out of Ukraine early if the fighting in eastern Ukraine escalated. About 300 U.S. Army paratroopers are currently deployed to Yavoriv in western Ukraine, about 800 miles from the front lines, to train the Ukrainian National Guard.

“As multiple global crises compete for our attention, we must not neglect the situation in Ukraine,” Portman wrote in the letter published on Cleveland.com.

“The current cease-fire is not credible, and the Obama administration and some of our European allies need to stop pretending that it is,” he added. “Thousands of Russian troops remain inside Ukraine and thousands more are right across the border. Every day, Ukrainian positions come under attack.”

In the letter, Portman pushed for the U.S. to send Ukraine military hardware and weapons, and framed the conflict as part of a broader struggle to deter Russian aggression in the region.

“Russian aggression in Ukraine won’t go away or resolve itself simply because we wish it to be so,” he wrote. “It’s time for the president to start shaping outcomes, and stop getting shaped by them.”