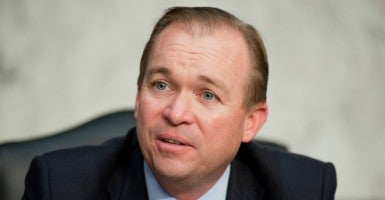 Just two weeks before the controversial Export-Import Bank’s charter expires, members of Congress today criticized the bank’s top official for pursuing a deal in which the bank—and taxpayers—could be on the hook for more than $100 million.

“This is more evidence that we’re beyond broken here at the Export-Import Bank,” Huizenga said. “At this point, [NewSat] appears to be handing you a $100-million loss.”

Ex-Im’s Board of Directors unanimously approved more than $300 million in loans for NewSat and disbursed $139 million to the company. Last year, however, the company entered into “technical default” with Lockheed Martin after it failed to make several payments. Lockheed Martin was building NewSat’s Jabiru-1 satellite.

The Australian company then filed for Chapter 15 bankruptcy in the United States in April, and NewSat is now selling its assets.

Ex-Im often touts its default rate of less than 1 percent. However, NewSat’s ability to repay its loan remains unseen.

Despite the skepticism from Mulvaney and Huizenga, Hochberg reassured the panel Ex-Im is still negotiating with the company.

“Every loan we make is not going to perform perfectly and flawlessly,” he said. “And this is one that is, frankly, right now, troubled. We’re working through a solution.”

NewSat’s satellite is close to completion, but Lockheed Martin is the primary owner. According to documents filed with a Delaware bankruptcy court, NewSat was given a May 18 deadline to secure more financing with Ex-Im and private financiers in an effort to save the project. If it couldn’t, NewSat faced having its contract with Lockheed Martin cancelled.

Ex-Im ultimately refused to extend more financing to NewSat, citing “policy/business decisions,” according to court filings, and Mulvaney was skeptical about why the bank would choose that option.

“Apparently the bankruptcy court gave you the opportunity to protect your investment or your loan by finishing the project. You chose not to do so,” Mulvaney said.

Lockheed Martin is now able to sell the satellite without repaying Ex-Im and private creditors for the $139 million it received from NewSat. NewSat made the payments to Lockheed Martin by using the Ex-Im loans.

“You’ve lost $100 million, and you’ve given a several-hundred-million dollar windfall to Lockheed Martin at the expense of the taxpayer,” Mulvaney said.

During the hearing, Mulvaney questioned why Ex-Im had no security interest in collateral, despite these recommendations.

“You lent $100 million to a satellite start-up, and you kept no security interest, no collateral at all?” Mulvaney asked.

Also included in Ex-Im’s 2012 reforms and finalized in 2014 were “know your customer” practices, and Huizenga said that had the bank correctly vetted NewSat, it would’ve protected itself from such a loss.

“It seems to me that either you knew about it and had some suspicions and went ahead with it, which obviously would be a bad decision, or you didn‘t have the systems in place to actually root it out,” Huizenga said. “Either one of those is a bad scenario from my perspective, and I’ve come to the conclusion that it’s beyond broken and we’re not going to be able to save the Export-Import Bank from itself.”

However, the company has been under intense scrutiny after internal audits—which were sent to Ex-Im—detailed conflicts of interest and excessive spending by the company’s top executives. The Daily Signal documented the company’s troubles in March.

Ex-Im’s Board of Directors approved up to $300 million in financing to the satellite company. However, just $139 million was disbursed, according to data from the bank.

Ex-Im’s charter expires June 30, and with just 14 legislative days left before the deadline, its future has been the subject of intense debate on Capitol Hill.

Rep. Jeb Hensarling of Texas, chairman of the Financial Services Committee, staunchly opposes the bank and argues it furthers corporate welfare and cronyism. Though many Republicans on the panel are pushing for Ex-Im’s end, the issue has proved to be divisive among the GOP.

>>> Commentary: How Congress Can Put a Stop to Cronyism and Corporate Welfare