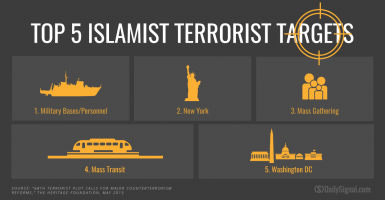 On the evening of May 3, two men armed with rifles attacked the Muhammad Art Exhibit and Contest in Garland, Texas. While both shooters were killed before they could get inside the exhibit, this attack is the 68th Islamist terrorist plot or attack against the U.S. since 9/11.

The incident has raised significant questions about the way terrorists are being recruited in the United States and what America can do to stop them.

These two infographics tell the story about a spike in Islamist terror activity and their top targets.