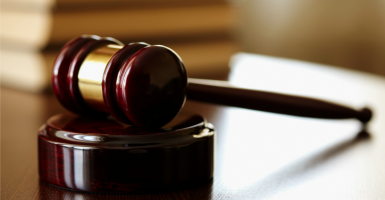 The Justice Department’s latest filings in the immigration lawsuit brought by 26 states in the Southern District of Texas are a little hard to believe—and somewhat comical, in a way.

Back in February, Judge Andrew Hanen issued a preliminary injunction against the implementation of President Obama’s executive orders on immigration. Now, in an attempt to explain why the injunction was violated, Leon Rodriguez, director of the U.S. Customs and Immigration Services, has outlined in an affidavit a long list of instructions and orders he gave to implement Hanen’s order.

The main excuse given for USCIS’s issuing three-year deferrals and Employment Authorization Documents to 2,000 illegal immigrants after the injunction was in place is that its computer system failed. But fear not. Rodriguez is “taking steps, including the modification of USCIS computer systems, to further minimize the potential for human error that could lead to unintended” violations of the injunction “in future DACA cases, regardless of the circumstances.” (There is no indication whether the autonomous computer system that made these errors is named “HAL.”)

Rodriguez does admit that USCIS “should have exercised greater management oversight of the efforts to halt the production and issuance of three-year notices and EADs.” But that’s not really much of an admission—there is no question thaat USCIS violated Judge Hanen’s injunction despite Rodriguez’s self-proclaimed “clear intent to stop the approval or issuance” of these documents. Rodriguez assures the judge that USCIS will get to the bottom of this, his own failure, noting that DHS has asked its inspector general to “investigate the circumstances” of what happened.

The Justice Department filed a second affidavit, from Donald W. Neufeld, associate director for service center operations at USCIS, supporting Rodriguez. Keep in mind that the administration’s main justification for the president’s 2012 program for immigrants who arrived as children (DACA) and for his expanded 2014 program (DAPA) is that, by exercising prosecutorial discretion to legalize illegal immigrants under these programs, DHS could focus on removing the most dangerous aliens—those who are a threat to national security or public safety.

Yet Neufeld blames DHS’s unlawful issuance on “recently discovered errors in its identification and tracking of cases decided under the 2012 DACA” program. In other words, DHS violated Judge Hanen’s injunction because of tracking errors in its computer system — the same system that supposedly will enable DHS to identify the “most dangerous” illegal immigrants and distinguish them from all of the others receiving benefits under the DACA and DAPA programs.

In fact, while it has admitted to erroneously issuing prohibited deferrals and EADs to 2,000 illegal immigrants, USCIS isn’t even sure that is the final number. According to Neufeld’s affidavit, his “efforts” to “identify all cases in which individuals” were wrongly issued these documents “remain ongoing.” So the total number of cases “may change from the estimates previously provided to the Court.”

When this “computer error” admission is combined with the May 4 inspector general report that DHS “does not gather and analyze prosecutorial discretion data” on DACA participants, it makes it difficult for the Justice Department to credibly argue that the DACA and DAPA programs will enable the administration to concentrate its efforts on deporting the most dangerous illegal immigrants. As Texas and the states say in a brief filed on May 20, these “explanations” by the government “further confirm the unwieldiness of the DAPA/DACA bureaucracy—so large and complex that not even Defendants have a full grasp of what their machinery is doing.”

The inspector general concludes that, because of these defects, DHS may “be missing opportunities to strengthen its ability to remove aliens who pose a threat to national security and public safety.” In fiscal year 2013, the year following the implementation of the DACA program, DHS actually released 36,000 convicted criminal aliens. It released another 30,558 such aliens in 2014.

The Justice Department filed an additional response to Judge Hanen’s April 7 order, which had castigated DOJ lawyers for misleading the Court into believing that no action would be taken to implement the president’s plan until late February. On March 3, DOJ informed Judge Hanen in an “advisory” that, in fact, more than 100,000 illegal immigrants had been granted three-year deferrals prior to the issuance of the injunction.

Hanen also criticized the DOJ’s lawyers for waiting two weeks after his Feb. 16 injunction order to inform him of this problem. On April 7, Hanen ordered DOJ to produce every draft of the “advisory” and the names of everyone at DOJ and DHS who knew about it and the granting of the 100,000 deferrals.

The DOJ lawyers apparently had a hard time understanding this order. Although they filed more than a thousand pages of supposedly “privileged” documents related to the “advisory,” along with a privilege log listing these documents, they apparently neglected to do what any lawyer knows is necessary when you file a privilege log (which lists documents a party to a lawsuit is claiming are privileged, the date they were prepared, the subject, and the individuals who prepared and received the legal documents). Judge Hanen had to issue another order on May 12 telling the government “to identify to the Court the individuals referenced in the privilege log,” including each one’s “name, position (and whether the individual is a lawyer or paralegal), title, and agency for whom the individual works.”

DOJ’s response has a key portion of the brief redacted. Those redactions appear to delete any information that would indicate when the DOJ lawyers discovered that DHS had been implementing part of the president’s plan. Although the response apologizes for the “misunderstanding that inadvertently resulted” from the misstatements by the DOJ lawyers, DOJ absolutely refuses to admit that its lawyers deceived Judge Hanen.

Instead, DOJ claims that its lawyers simply misunderstood Hanen’s inquiries about the implementation of the amnesty plan. The government even tries to blame the states, saying that they had not challenged the 2012 DACA program, ignoring the fact that the states had challenged the expansion of that program that the president announced on November 20, 2014.

DOJ also makes the astonishing claim that its lawyers “did not appreciate that the immediate implementation of three-year deferrals [under the expanded DACA program] was an issue of consequence in the timing of the preliminary injunction litigation.” The failure to “appreciate” what was a basic issue in this litigation, evident from all of the pleadings filed by the states and Judge Hanen’s crystal-clear questions in the hearing he held, raises troubling questions about the competence of the DOJ lawyers handling the case.

DOJ tries to convince Judge Hanen that he should not actually review any of the documents DOJ filed with the Court because its response and the privilege log should convince the judge that the DOJ lawyers informed Judge Hanen of the problem as soon as they realized there was a “potential for misunderstanding.” DOJ also warns that the exposure of “sensitive materials” could cause “significant difficulties, and thus should be avoided.”

Those “sensitive” materials, by the way, include two envelopes, given to the Court in camera, that contain “communications between DOJ and the White House concerning the Advisory” as well as “purely internal White House documents” and a “list of attorneys at the White House with whom DOJ corresponded about the Advisory.” Even if Judge Hanen decides to review these documents, however, DOJ argues that in no event should the government be ordered “to provide those privileged materials” to the states.

So these filings are more of the same: The government claiming that its lawyers did nothing wrong and that DHS unintentionally violated the injunction order because of a computer glitch, although the filings raise the intriguing issue of possible White House involvement in the misinformation given to the Court. We will have to see what Judge Hanen thinks of the administration’s nothing-to-see-here excuses.