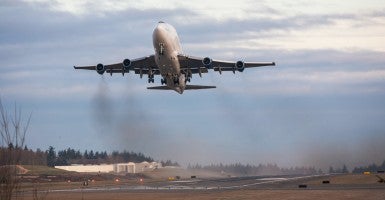 Following reports that one of the Export-Import Bank’s biggest beneficiaries would move overseas if the agency’s charter expired, the leader of the House Financial Services Committee today spoke out against the claims, calling them a “bit of bluster.”

Speaking to reporters at a press conference on the Export-Import Bank today, House Financial Services Chairman Jeb Hensarling of Texas addressed claims from Boeing that the company would be forced to move business overseas if the agency is not reauthorized.

“I doubt I believe it,” Hensarling said. “I think, frankly, it’s a bit of bluster. I also know that I have lots of small businesses in the 5th District of Texas that manage to export without the benefits of Ex-Im, and they’re pretty ticked that their tax dollars are being called upon to finance their competitors.”

In an interview with the Financial Times, Scott Scherer, Boeing Capital’s head of regulatory strategy, said the airplane manufacturer would consider outsourcing jobs to countries with more friendly export policies.

Boeing alone benefits from 30 percent of Ex-Im’s financing, and the agency has earned the nickname of the “Bank of Boeing.”

Hensarling, whose committee has jurisdiction over the bank, stressed that roughly 98 percent of exports are financed without assistance from Ex-Im and noted that should the bank’s charter end, existing financing wouldn’t be impacted through the life of the loans and loan guarantees.

For Boeing, that means Ex-Im financing would last another 18 years, as it has an existing extension of credit, Hensarling said.

“They would be around a long time,” he said.

Ex-Im’s charter expires June 30, and for its life to end, Congress would simply not have to take any action.

House Speaker John Boehner, though, urged Hensarling last month to come up with a plan to present to the Financial Services Committee, whether it be winding down the bank or reforming it.

Boehner deferred to Hensarling to take the lead on Ex-Im, but there have been concerns surrounding House leadership bypassing the Financial Services Committee and passing a bill reauthorizing the bank with Democrats’ help.

“It would be a real mistake, and I don’t anticipate that happening,” Jordan, chairman of the House Freedom Caucus, said.

Meanwhile, Hensarling stressed that House leadership was committed to maintaining regular order and said the “momentum” is in favor of those opposing Ex-Im.

“This is going to be a critical vote, hopefully a non-vote, on the future of the Republican Party, the future of our economy,” he said.

The House Freedom Caucus, an invitation-only group made up of conservative lawmakers, along with Hensarling, have been leading the charge against Ex-Im’s reauthorization. They argue the bank is an engine of corporate welfare and cronyism.

“We’re trying to help lead the party in a new direction—one that says we want a fair economy for all. We want equal opportunity for all,” Hensarling said of ending Ex-Im. “We want an economy where your success is dependent upon how hard you work on Main Street, not who you know in Washington, D.C.”

However, the bank’s supporters, including President Obama and Sen. Elizabeth Warren, D-Mass., believe the bank helps small businesses expand into global markets and creates jobs in the U.S.

Reps. Raul Labrador of Idaho, Jordan of Ohio, Bill Huizenga of Michigan, Justin Amash of Michigan, John Fleming of Louisiana, Scott Garrett of New Jersey, Mick Mulvaney of South Carolina, and Sen. Mike Lee of Utah joined Hensarling at the press conference and spoke in opposition to the bank.

Top officials from FreedomWorks, Freedom Partners Chamber of Commerce, Americans for Prosperity, Heritage Action for America and the Club for Growth also attended.