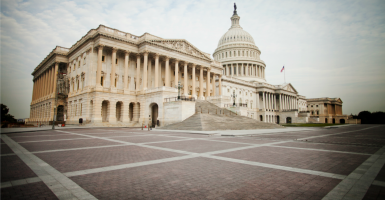 In recent weeks there’s been a bit of controversy in Washington over an “alphabet soup” of legislation and tactics all dealing with trade issues.

Amid the hubbub, Americans should be aware that Congress is working to bring back an expensive program that has been shown to hurt American workers—and they’re trying to push it through by tacking it to important legislation.

The Trade Promotion Authority is an agreement by the House and Senate with the president to “fast track” future trade bills and ensure they get an up-or-down vote in Congress. It is being brought up again to help along trade deals like the Trans-Pacific Partnership and the Transatlantic Trade and Investment Partnership.

Free trade is certainly a good thing. But some liberals in Congress who are less than enthusiastic about free trade insisted that Trade Promotion Authority only be passed if it is accompanied by a reauthorization of the Trade Adjustment Assistance program. The purpose of the TAA is ostensibly to pay and train workers who can prove they lost their jobs to foreign competition.

Unfortunately, it’s been established that the Trade Adjustment Assistance program fails to train displaced workers well, and that TAA training participants make less money after training than non-participants, a finding confirmed by the Government Accountability Office.

And it costs a billion dollars a year. Tacking it to Trade Promotion Authority passage tarnishes the whole thing.

The small numbers of workers who get laid off because of foreign competition deserve a chance at employment, and they deserve better than the Trade Adjustment Assistance program. They’re best served by our government allowing our economy to thrive through lower taxes and fewer regulations, creating more jobs.

Ronald Reagan rightly noted that “no government ever voluntarily reduces itself in size. Government programs, once launched, never disappear.” Stopping reauthorization of bad programs is one of the few opportunities available to Americans for scaling back big government.

Trade Promotion Authority should be considered on its own merits, and good conservatives can disagree on whether the current draft of TPA is appropriate. However, all conservatives should agree that it should not be tied to Trade Adjustment Assistance, an expensive and ineffective program.

Now that it’s done, Trade Promotion Authority in its current form doesn’t deserve passage. A free trade deal worth making can and should be passed on its own, without throwing a bone to those who would waste our tax dollars.