This Woman Left the Abortion Industry for the Pro-Life Movement. Now, She’s Written a Book About Her Journey ‘From Death to Life.’ 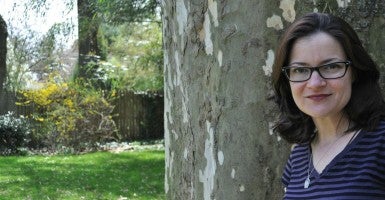 Jewels Green was a mess when she was 17. She was a drug-using high school dropout who had had an abortion. Reeling from depression, given to self-harm, she even tried to kill herself before she was admitted to a psychiatric hospital.

Not long after, she turned to the abortion industry again, this time for a job.

“After all,” she said, “If I could convince myself, or at least pretend, that abortion was OK, then maybe what I let happen to me wasn’t that bad and I could try to move on.”

It didn’t work. Green eventually quit the job, and afterward underwent what she calls a “drastic” conversion.

After she choose to become a full-time stay-at-home mother, she eventually “embraced the pro-life position from conception to natural death.”

It wasn’t always easy, but it was worth it, she said.

Today, she not only works to raise her children, she has become a pro-life activist, writer and speaker. She recently published a new e-book, “Abortion Hurts: A Collection of Essays on My Journey From Death to Life” that details her journey from the abortion industry to the pro-life movement.

Green told The Daily Signal any profits from her book, which is available on Amazon, will be donated to “life-affirming” pregnancy resource centers.

She plans to choose a different recipient every year. This year’s donations will go to Stanton Healthcare/Charlotte Center for Women,” which are life-affirming medical clinics strategically located near abortion centers. The mission of Stanton Healthcare is to replace Planned Parenthood.

“How wonderful would that be?” Green asked.

Green said she decided to publish the book to help others heal, a process she said is unique to each woman—and man—affected by abortion.

“I decided to assemble a collection of essays that best tell my personal story as a series of snapshots, rather than a full-length memoir,” she said. “My hope was to share my experiences in a format that would be easy to publish and distribute to readers.”

Citing her own life experience as a post-abortive woman and as a former clinic worker, Green is adamant that despite claims to the contrary from the pro-choice movement, abortion hurts—rather than helps—women.

“This is the hardest part, because all of us working at the abortion facility thought we were helping women,” she said.

“More than half of women seeking abortions are doing so under some type of coercion, whether physical, emotional, financial, or other ways. How is being complicit with a woman’s oppressor helping her? Most women who have abortions report afterwards that they felt they had no other choice. Women need—and deserve—legitimate and practical non-violent options that support her and her unborn child, whether she chooses parenting either married or single, kinship care, or adoption—closed or various levels of open adoption options.”

When asked what she would say to a woman who thought she had no choice other than abortion, Green replied, “I would remind her that there are countless devoted strangers willing to help her every step of the way, and I’m one of them.”