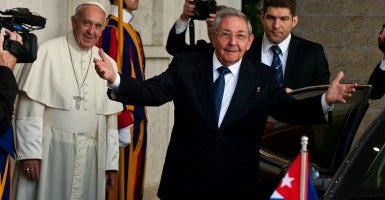 Many Catholics were cheered this week upon hearing that the dictator of Cuba Raul Castro has told the pope he might return to the folds of the church. When the game is cheating the devil out of souls, deathbed conversions are considered the ultimate Hail Mary pass.

So hopes were lifted when Castro, upon meeting Pope Francis at the Vatican during a visit to thank him for brokering an unequal deal with President Obama, said, “if the pope continues to speak this way, sooner or later I could start praying again and return to the Catholic Church. I’m not kidding.”

But the odds are that the angels will have to wait for Castro’s conversion a bit longer. One supremely cynical action he took during his trip Sunday should put us on notice that his statements to the pontiff were in keeping with traditional communist duplicity to confuse believers and skeptics alike.

In the official exchange of gifts, Castro gave Pope Francis a picture of a cross made of migrants’ boats and with a migrant kneeling before it. In doing this, Castro and the cadre that surrounds him once again proved themselves to be canny observers of world events and of having a deep understanding of their host’s concerns.

Europe is being hit by a new wave of desperate migrants crossing the Mediterranean from North and sub-Saharan Africa. Hundreds have died as crammed makeshift boats sink during the perilous voyage. Francis has clashed with European governments by asking them to throw their doors open to the migrants.

The men from Havana were obviously well aware of this situation and knew this was a media opportunity they could not pass up—show the world you’re on the side of the compassionate by siding with the oppressed and their spokesman, Francis.

In other words, Castro and his henchmen were behaving like communists always do. As we know from a recent Catholic News Agency interview with Ion Mihai Pacepa, one of the highest ranking Iron Curtain defectors in the 1970s, the KGB itself created Liberation Theology.

This quasi-Communist movement, very important in Latin America in the 1970s and 80s but less so today, emphasized the oppressed vs. oppressor Marxist narrative. As Pacepa told Catholic News Agency, the plan was that the “the KGB take secret control of the World Council of Churches (WCC), based in Geneva, Switzerland, and use it as cover for converting Liberation Theology into a South American revolutionary tool.”

The depths of cynicism were reached of course not in the motives for the gift but with the gift itself. Cuba became a wealthy island in the 20th century by producing many things: sugar, tobacco, rum, music, etc. Since the Castros took over in 1959 and established communism shortly thereafter, Cuba has been known for producing only one thing: exiles.

Between one-tenth and one-twentieth of the population have fled (estimates vary), and they’re the lucky ones. Those left behind have all of their civil rights suppressed—whether it’s freedom of the press, of religion, of free speech, of free association, etc. None of them now exists.

No wonder then that Cubans still constantly try to flee the land of their births by crossing the shark-infested Florida Straits on rickety rafts. Tens of thousands have died at high seas, according to Maria Werlau, executive director of the Cuba Archive Truth and Memory Project. But the shame for Raul Castro and his goons doesn’t stop there.

When they catch these rafts and boats, they don’t tow them back to the island, they sink them. It happened most recently—that we know of—on Dec. 20, three days after Obama announced the U.S. would extend recognition to the Castro regime.

Any talk that Raul Castro would be seen crossing himself on a regular basis at a pew at Havana Cathedral would be belied by his government’s track record of repressing Catholics, keeping them out of the Communist Party, the universities, the good jobs and all the perks that come from keeping your head down in his socialist paradise.

But the fact that he gave Francis a monument honoring migrants should seal it for most of us.