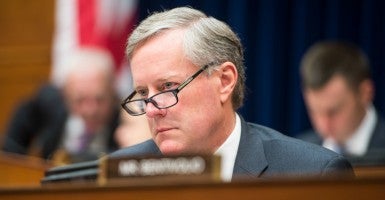 Rep. Mark Meadows of North Carolina is one of 11 Republicans to face retribution for voting against party leadership. (Bill Clark/CQ Roll Call/Newscom)

A group of House conservatives is pressuring GOP leadership to allow the chance to “strengthen” a Senate-passed bill imposing congressional review over a proposed nuclear deal with Iran.

Members of the conservative House Freedom Caucus are proposing a series of amendments because some believe the Senate bill does not give Congress enough power to actually stop—or even influence—an Iran nuclear deal lawmakers don’t like.

The amendments will put pressure on House Speaker John Boehner, who must decide to either block attempts to change the legislation—as Senate Majority Leader Mitch McConnell, R-Ky., did in his chamber—or allow debate that could derail the fragile bipartisan agreement.

“A number of us are pushing hard to at least have vigorous debate on the merits of the bill and how we can potentially make it stronger and more palatable,” said Rep. Mark Meadows, a Freedom Caucus member, in an interview with The Daily Signal. “My impression of the current bill is that it’s not strong enough to really address concerns that most Americans would have [over a Iran nuclear deal].”

The current Iran review bill “is not strong enough to really address concerns that most Americans would have,” says @RepMarkMeadows.

Meadows said House leadership is still evaluating whether to allow debate on the bill or to bring it to the floor “under suspension,” which would prevent amendments from being offered.

Meadows, R-N.C., acknowledged “there is a good chance” the bill would pass if Boehner, R-Ohio, and his team brought the bill forward on suspension and without debate.

“There’s a whole lot of lobbying being done that [some congressional oversight] is better than nothing,” Meadows said.

>>>Senate Votes to Give Congress Review Over Iran Nuclear Deal

Congress could offer only a resolution disapproving the deal. If the House and Senate could get enough votes to overcome a presidential veto—which is considered doubtful—Obama would have to leave the congressionally mandated sanctions in place.

“I think the bottom line with this bill is that we are giving indirect congressional approval to a potentially bad deal because we can’t muster the number of votes to override the veto on a resolution of disapproval,” Meadows said.

“I don’t want to be condemning Sen. Corker and the hard work he’s put forth. This may be the best we can get. But in my mind, it is really going against what the founding fathers set up.” Meadows said one change to the bill being discussed is to specify that the resolution of disapproval not be subject to a filibuster in the Senate if Obama were to veto it and an override vote was needed.

Another amendment Meadows suggested would require that any breach of a nuclear deal by Iran be reported to Congress, and that the legislation clarify that the stipulation apply to any sort of violation, not just one the administration considers “significant.”

“The reporting language and asking for a simple majority vote in the Senate [no filibuster] would be two procedural things we can ask for that certainly don’t send a message and really wouldn’t be objectionable to the Iranians because it has nothing to do with the Iranian regime—it has to do with our government process,” Meadows said.

A third amendment described by Meadows would mandate that the director of national intelligence certify Iran has “dismantled its ballistic weapons development and research programs.”

House conservatives would also like to mandate that Iran stop support and funding of terrorism and terrorist groups, but Meadows says that issue may be addressed with standalone legislation.

“Some of these issues, like forcing Iran to recognize Israel, are not material to the fact of whether [Iran is] following an agreement,” Meadows said.

The United States and other world powers have set a June 30 deadline to work out a deal to limit Iran’s nuclear program in exchange for sanctions relief. In April, negotiators announced the framework of a proposed agreement.

Meadows hopes a debate over the agreement—and Congress’ role in enforcing it—will allow lawmakers to make any deal stronger.

“I am not opposed to doing a deal with Iran,” Meadows said. “Am I in favor of negotiating and avoiding ultimately what would be a prelude to military action [if there is no negotiation]? The answer is yes. However, we have to make this particular piece of [review] legislation stronger so we can reach a better deal.”