Did Scott Walker ‘Evolve’ on Immigration? 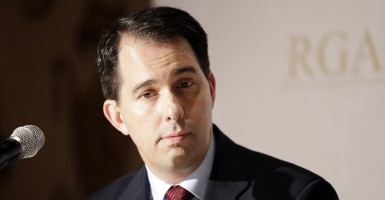 For weeks now, Scott Walker has attracted attention from politicos and pundits with his statements on illegal and legal immigration.

Whether they like or loathe what they hear the Wisconsin governor saying on processing illegal immigrants and curbing legal immigration, tuned-in activists want him to spell out his thinking if he seeks the Republican nomination for president.

This is especially important, they suggest, because of reports that Walker has not always presented his message on immigration reform in a consistent way.

The issue is coming to a head at a time when President Obama is pressing forward with executive actions allowing millions of illegal immigrants to get work permits.

As one immigration authority argued, it’s not enough for Walker simply to say he changed his mind and now opposes amnesty.

First, Walker disavowed an openness to amnesty for illegal immigrants that he had held for a decade or more.

“My view has changed, I’m flat-out saying it,” Walker told host Chris Wallace in an interview on “Fox News Sunday” that aired March 1. “I don’t believe in amnesty, and part of the reason that I made that a firm position is because I look at the way this president has mishandled that issue.”

In the same interview, however, Walker said he could envision “a way” for illegal immigrants to win citizenship after paying penalties yet to be determined.

Next, Walker said late last month they would first have to return to their country of origin. He then moved into territory that most politicians avoid: He said he would consider new “adjustments” or “restrictions” on how many legal immigrants are allowed in.

His underlying principle, Walker says, is first considering jobs and wages available to workers who already are U.S. citizens.

“The next president and the next Congress need to make decisions about a legal immigration system that’s based on, first and foremost, protecting American workers and American wages,” Walker told conservative commentator Glenn Beck on April 20. “We need to have that be at the forefront of our discussion going forward.”

When he was criticized for his remarks in a Wall Street Journal editorial, among other places, Walker last week told another radio host: “If we’re always thinking about the impact on the hardworking Americans, we’re gonna be fine and [if] we don’t think about that, well, then we get bad policies in America.”

Walker, who won elections for governor three times over four years in a state that is the cradle of the progressive movement, routinely refers to this constituency of “hardworking Americans.”

In a development that Walker could not have anticipated, Democratic favorite Hillary Rodham Clinton this week declared that as president she would go around Congress and use executive powers to move far more illegal immigrants into “full citizenship” than Obama has sought to cover with his controversial executive actions.

No GOP candidate has consistently supported a path to citizenship. When they talk about “legal status,” that’s code for “2nd class status.”

“I will fight for comprehensive immigration reform and a path to citizenship for you and for your families across our country.”

Asked to describe Walker’s shift on the issue, spokeswoman AshLee Strong told The Daily Signal in an email:

Governor Walker has clearly and repeatedly stated that President Obama’s unconstitutional executive action and the collateral damage it has had on his fellow governors has made it evident that our priorities must be repealing the executive action, securing the border, and enforcing the laws on the books while implementing a workable e-verify system. Then we can address fixing our legal immigration system and deal with those here illegally. Amnesty is not the answer.

Mark Meckler, a California resident who was a leader in the early tea party movement, said he has not heard much buzz from grassroots activists about Walker’s having changed his views on illegal immigrants.

But Meckler said he expects many will find Walker’s blunt admission that he changed his mind “refreshingly honest.”

Immigration and the Job Market

Now president of Citizens for Self-Governance, Meckler said the Wisconsin governor appears to be breaking through with the argument that the job market should be a factor in making immigration-related decisions—and people will want to hear more.

“His ‘new position,’ that you have to look after the American worker first—that in itself is popular,” Meckler said.

“The fact that he’s taking on legal immigration makes his opposition to illegal immigration look much more principled and much more consistent,” said Roy Beck, executive director of the limited-immigration group NumbersUSA, in an interview with The Daily Signal.

Beck said it would have tremendous appeal for voters “who feel some sort of direct competition with illegal aliens.”

He described these voters as wage earners who don’t have college degrees and “have been absolutely hammered by the job market for 30 years” and thus “been kind of adrift” in the economy.

Beck said polling shows those voters went to the polls in high numbers in the midterm elections of 2010 and 2014, when Republicans took back the House and Senate. They didn’t turn out heavily, though, in 2008 and 2012, when the party’s presidential nominees, John McCain and Mitt Romney, lost to Obama.

.@HillaryClinton's full embrace of amnesty is unfair to hardworking Americans & immigrants who followed the law to achieve these rights -SKW

RT if you agree: by supporting @BarackObama's lawless executive action, @HillaryClinton once again believes she's above the law. – SKW

“There is a pretty strong and growing consensus that immigrants are of value to the United States, our economy, our society,” National Immigration Forum’s Noorani told The Daily Signal. “To say that as a country we need to limit legal immigration is a pretty defeatist way of looking at how we thrive and prosper.”

Political observers, as well as Walker himself, cite the influence of Sen. Jeff Sessions, R-Ala., in the governor’s shift to a tougher line on both the illegal and legal aspects of immigration. Sessions, chairman of the Judiciary Committee’s immigration subcommittee, has been a critic of amnesty and a proponent of new limits on legal immigration.

Asked about the extent of the pair’s conferring on related questions, spokesmen for both men declined to say. Strong stressed that Walker—who is not a formal candidate for president—spoke with “a cross section of business leaders, academics, immigration attorneys, think tank leaders, and state and federal elected officials.”

Some signposts in Walker’s “evolution” on immigration reform:

2006: As the elected executive of Milwaukee County, Walker signs a resolution backing the McCain-Kennedy immigration reform bill in the U.S. Senate, a measure that included an amnesty to allow illegal immigrants to become citizens. He also supports lobbying Congress to pass the bill.

2013: Walker tells a newspaper’s editorial board that it “make sense” for some of the millions of illegal immigrants to be granted citizenship. He also says he welcomes “people who want to come here and work hard and benefit,” no matter where they’re from.

March 1, 2015: “I don’t believe in amnesty,” Walker tells Wallace on Fox, but leaves the door open for “a way” for illegal immigrants to become citizens.

March 14:  Walker says he changed his position because he “listened to people nationwide, especially border governors” such as Greg Abbott of Texas.

March 26: After Walker’s dinner with New Hampshire business leaders, guests report that he supported a path to citizenship for some illegals. The governor denied he made such a remark.

April 20: “No amnesty,” Walker says on Glenn Beck’s radio show, explaining that gaining citizenship should require illegals to “go back to their country of origin” and “get in line behind everybody else who’s waiting.” He talks about the need for “adjustments” in the legal system to protect U.S. workers and wages.

April 27: Walker repeats that condition for citizenship in an appearance on Howie Carr’s Boston-based radio show. He also suggests he would support “restrictions” on legal immigration that “make a whole lot of sense” by factoring in “the impact on American workers and American wages.”