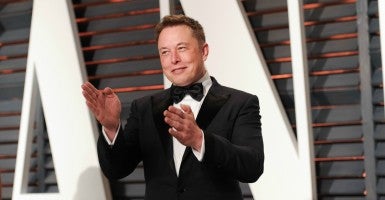 The chairman of the government’s Export-Import Bank has repeatedly mischaracterized several deals that have benefited billionaire Elon Musk.

These misrepresentations, among other mismanagement and dysfunction within Ex-Im, reinforce the case for ending the crony bank.

In numerous speeches and “success stories” promoted in bank reports and press releases, Ex-Im Chairman Fred Hochberg has claimed that Space Exploration Technologies Corp.—commonly known as SpaceX—is a small business that has only  “limited” options for export financing, and thus is “relying on Ex-Im Bank” to expand its business. Ex-Im, Hochberg has said, is “excited to play such a key role” in its growth.

This “small business,” which designs, manufactures and launches rockets, employs 4,000 people. But facts aside, hyping the bank as the savior of Main Street is central to Hochberg’s lobbying campaign to win reauthorization of the bank’s charter.

Just 10 companies were the beneficiaries of 64 percent of Ex-Im subsidies in 2013.

It’s all nonsense (to say the least). SpaceX was founded in 2002—11 years before Ex-Im arranged $106 million in taxpayer-backed loans.

Nor is its founder Elon Musk strapped for cash. Musk is the co-founder of PayPal, the world’s largest online payment system (with an estimated value of $40 billion). He also co-founded Tesla Motors, recipient of billions of dollars in tax and regulatory largesse.

Earlier this year, Google and Fidelity Investments purchased a 10 percent stake in SpaceX for $1 billion (giving the company a market valuation of $10 billion).

In fact, SpaceX has received contracts totaling more than $542 million from the Department of Defense and NASA, and the space agency announced it will pay SpaceX $2.6 billion to complete development of a cargo vehicle capable of carrying a crew of four to the space station. Pentagon officials, meanwhile, say they expect to certify the company soon for lucrative military payloads.

To obscure the truth about SpaceX seems rather pointless because the vast majority of Ex-Im transactions benefit very large corporations.

On the buyer side of the transactions, the primary beneficiaries are also very large firms—many state-controlled—including Pemex and Emirates Airline.

Even that fraction is artificially inflated by the bank’s expansive definition of small, which includes firms with as many as 1,500 workers, as well as companies with revenues of up to $21.5 million annually.

Alas, the bank has a history of misrepresenting its beneficiaries. An investigation by the Reuters news agency has found that potentially hundreds of the subsidy recipients categorized as “small businesses” by Ex-Im are actually very large enterprises or units of multinational conglomerates.

In recent years, only 20 percent or so of Ex-Im financing benefited small businesses.

“Companies owned by billionaires like Warren Buffet and Mexico’s Carlos Slim, as well by Japanese and European conglomerates, were listed as small businesses,” Reuters reported last year. So, too, were Austria’s Swarovski jewelers, North Carolina’s Global Nuclear Fuels (owned by General Electric) and Japan’s Toshiba and Hitachi. The bank’s list of small businesses in Texas includes engineering giant Bechtel, which has 53,000 employees.

Hochberg is engaged in a fight over reauthorization of the bank charter, which expires on June 30. It’s tough to convince Congress or the public that titans of industry can’t manage to access private financing, thus prompting the chairman and his allies to paint the bank as the salvation of small business.

But mischaracterizing SpaceX as a small business in need of subsidies—indeed, grossly (and repeatedly) exaggerating Ex-Im’s benefits to Main Street—is further proof that bank officials lack any credibility. It’s time to allow the bank charter to expire.