Should Texas Require Hair Stylists to Have Over 2,000 Hours of Training to Legally Braid Hair? 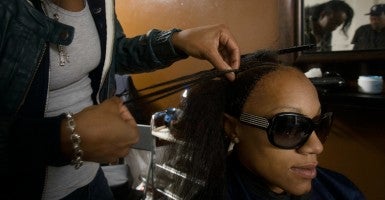 Did you know Texas imposes stringent license regulations in order to open an African hair braiding business, including a requirement to attend more than 2,000 hours of barber school?

Now the Texas Legislature is moving forward on a bill that gives their citizens the freedom to pursue a career in this field without onerous regulatory burdens.

This issue received prominence in 2007 when Isis Brantley, owner of the Institute of Ancestral Braiding and founder of the Naturally Isis Natural Hair Parade and Festival, sued the Texas government for requiring her to complete 2,250 hours of barber school, pass four exams, install 2,000-square-foot space, 10 barber chairs and five sinks in her shop, all to teach others how to braid hair.

Brantley won her case and brought significant attention to the issue of occupational licensing. This year, the Texas government is taking steps to make sure that other regulations like the ones that harmed Brantley are repealed.

Rep. Craig Goldman, R-Fort Worth, sponsor of the House bill, noted the absurdity of laws that unduly burden basic occupations with excessive licensing requirements, stating, “I’m happy to have a ridiculous license removed from statute. When I got put on the licensing committee, we looked for every bad regulation that was on the books and said, ‘How many of these can we remove?’ I’m glad that we were able to take the first step here.”

Similar regulations on hair braiding exist in more than 39 states, including the District of Columbia. According to the Institute for Justice, a non-profit organization that litigates against regulatory burdens, the necessary hours to obtain a license “range from six in South Carolina to 2,100 in Iowa.”

The Heritage Foundation has written extensively on how many states impose strict licensing requirements for small businesses—barbering, teeth-whitening, interior decorating—even though many of these fields do not require special expertise.

The ostensible purpose of occupational licensing is to ensure that only qualified individuals perform certain types of work. Americans generally want to know that their doctor completed medical school and that their lawyer passed the bar exam.

But do they really want their stylist to complete 2,100 hours of training in order to braid their hair?

Government-mandated licensing regulations all too frequently shelter current businesses by denying new entrants the opportunity to compete in the market. It is easier to compete with another company when they are not allowed to open a business to begin with.

The result is that consumers pay more for services because there are fewer rivals.

The government should not be in the business of picking winners and losers in the marketplace, especially in industries that do not require specialized or expert knowledge.

The Texas Legislature should be applauded for its efforts to remove burdens on hair braiding. It should look for other ways to ensure that every Texan can succeed in their business without irrational government restraints—and other states should follow Texas’s lead.