Why Obama Cozying Up to Castro’s Cuba Will Backfire 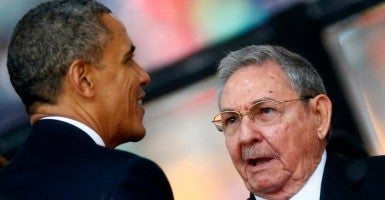 With the “historic” clasp of hands in Panama City, Panama last week with Raul Castro, President Obama took the next fateful step toward normalizing relations with the Western Hemisphere’s most repressive regime.

Seemingly desperate to move beyond a series of foreign policy flubs such as Iraq, Russia and Libya, cozying up to Castro’s Cuba—now officially removed from the U.S. terrorism list—still boggles the mind.

The idea that engagement is going to change Cuba is folly.

While we as Americans should have no issue with the Cuban people, who are victims of their government’s hard-line policies (like the Iranians, North Koreans and others), we should hold Havana’s jefes accountable for their authoritarian actions.

Normalizing relations won’t do that.

Indeed, let’s be sober about this: We’re dealing with a dictatorship that will gladly gobble up our generosity—but Castro & Co. completely comprehend that liberalizing Cuban politics, society and economy will mean the end of their sad socialist story.

Worse, by legitimizing the cult of the Castros—who harass and imprison Cubans for their political views and have done so for decades now—we’re vacating bedrock American moral and ethical principles.

Make no mistake about that.

Indeed, while almost unfathomable, The Wall Street Journal reported that the Castros jailed more than 1,000 Cubans for political reasons just since President Obama announced the start of a normalization process in December.

And yet the U.S. president strangely saw it as savvy—despite the reported crackdown on dissidents—to sit down with Cuba’s presidente for an hour-long meeting at the Summit of the Americas.

What does that tell the regime?

It signals that Washington is willing to look the other way as the Cuban people continue to suffer at the hands of Havana’s Ministry of Interior, responsible for Cuba’s brutal domestic security.

There’s reason to be concerned about Cuba’s activity abroad, too. It was fingered in sending weapons to North Korea in 2013 in violation of U.N. sanctions; Havana has long had ties with the Colombian narcoterrorists, FARC.

And yet the Obama administration saw fit to remove Cuba from the list of state sponsors of terrorism, where it has been since 1982.

Cuba’s promises aside, it has also been reported that Russia may amp up its presence in the Caribbean Sea, including possible ship visits, long-range bomber flights and joint military exercises with its Cuban compadres. Arms sales are also possible.

We seem to forget the trouble Cuba caused in this hemisphere when it was flush with Soviet support during the Cold War. With Moscow eager to make mischief for Washington, what use might it make of Havana today?

Equally troubling, it’s not clear what Team Obama’s end game with Cuba is other than let’s see what happens if America alters course. The problem is that Washington will change—if the White House gets its way—but Havana won’t.

In other words, it sounds like we’re talking about a lot of U.S. “give” without a lot of U.S. “get”—that’s not at all what we should be striving for in our Cuba policy, especially when effecting change on the “island prison” is so important.