Why Is China Building Artificial Islands? 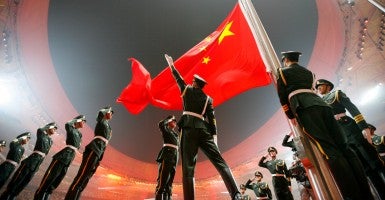 Check this: In a brazen move, the People’s Republic of China is now building “islands” in the South China Sea to bolster its position against several other East Asian countries—and the United States.

China is actually dredging sand and piling it up on existing reefs to create new islands that, according to Beijing, will have both civilian and—more troubling—military purposes.

According to analysts, China has started work on some seven artificial islands—so far.

Obviously, land reclamation is common, but it’s usually adjacent to a country’s coastline, such as a new harbor facility or airport or even an island within a state’s territorial waters.

This isn’t that. Most of this land fill activity is around 1,000 miles from China.

In response to being roundly criticized for reclaiming land outside what is customarily considered national waters (that is, 12 miles from the coast) Beijing essentially says, “What? It’s already ours.”

According to Reuters, a Chinese spokesman recently said: “The relevant [island] construction is entirely within the scope of China’s sovereignty. It is fair, reasonable, lawful, it does not affect and is not targeted against any country. It is beyond reproach.”

To ensure “clarity,” Beijing marks its territorial claims in the South China Sea on regional maps with a “nine-dash line” that encloses what it considers to be Chinese territory.

Further, according to Beijing, its sea-based claims are historical, based on the belief that ancient Chinese sailors plied Southeast Asia’s waters and landed on its islands.

Well, there you have it. Case closed.

But why is China doing this?

First, Beijing likely believes that building outposts in the disputed area will work to solidify its claims to the South China Sea.

Since this sort of “sand,” er, “land grab”—to my knowledge—has never been done before, Beijing may decide that it has a legal advantage in international law by doing so.

Instead of warfare, think of it as “lawfare,” essentially using legal means instead of force to advance your political, economic and security interests.

If the international community rolls over, Beijing may insist on—backed by warships and planes—exclusive economic rights around these new islands, despite going against international law.

That could mean that the natural resources for 200 miles around these “instant islands” would be Chinese; no fishing or exploration or drilling for oil and gas without Beijing’s say-so.

Second, the building of military bases on these man-made islands would push Chinese influence far into the Pacific Ocean, projecting Beijing’s military might, especially if airstrips are built.

These new defense outposts could be used to control the area, including trade and air/sea traffic (e.g., U.S. warship movement) in and through the region.

It’s hard to see the good news in this.

Considering what is going on in the South China Sea already, we probably shouldn’t be shocked if China makes robust claims elsewhere to advance its national interests.

Oh, yeah?…?China is already calling itself a “near Arctic” state, a region of increasing geostrategic, trade and natural resource importance—what a surprise.