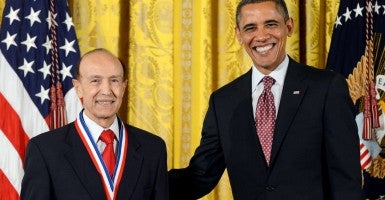 One of the ways that low taxes promote economic growth is by attracting people with valuable ideas. In a new working paper, economists from the University of Pennsylvania and Harvard University measured how many “superstar inventors” are attracted by low taxes.

They found that if top tax rates were cut 10 percentage points, the number of foreign superstar inventors choosing to live and work in the U.S. would increase by 38 percent.

Dr. Gholam Peyman is one of these superstar inventors. Peyman, the inventor of LASIK eye surgery, emigrated from Iran to Germany before moving to and becoming a citizen of the United States.

In America, he created a whole new industry of eye research and has contributed to the American economy with more than 149 U.S. patents in a myriad of medical disciplines.

When inventors immigrate to take advantage of lower tax rates, they tend to patent and implement their ideas in their new country.

The authors find that superstar inventors’ patents lead to significant economic gain for the country they live in. For every 10 percentage point tax cut in the U.S., the economy gains $5.6 billion from new innovation by superstar inventors. This doesn’t include the positive spillover growth for the communities where the inventors live and the industries their inventions help.

The authors conclude by pointing out that inventors are key determinants of economic growth and that countries which allow inventors to become rich from their diligence and brilliance reap the indirect benefit of the new inventions, which make the rest of us healthier, wealthier and happier.