The Problem With International Outreach to Iran 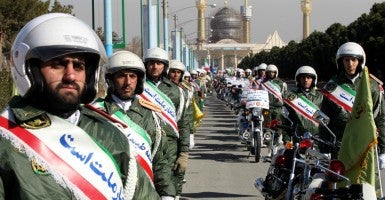 The nuclear deal with Iran announced by President Barack Obama is a mirage—an agreement now to agree later. But it stands for something bigger: the belief that it’s better to have the bad guys inside the tent than out of it.

As the president put it last year, he believes that, if only Iran would limit its nuclear program, it would be “a very successful regional power.” The job of the United States, therefore, is to grind off Iran’s roughest edges and bring it into the community of nations, which will supposedly complete the job of transforming Iran.

This has been the guiding theme of U.S. foreign policy, with a few exceptions, for years. President Bill Clinton argued that only by admitting China to the World Trade Organization could we hope to remake it into a law-abiding, responsible trading partner. And in time, that would change China’s political order.

No one has personified this theory of engagement like Obama, who has used it to justify outreach to Iran, Burma and Cuba. But both Democratic and Republican presidents have usually operated on the theory that the way to get what you want is through inclusion.

From admission to the United Nations on down the hierarchy of international organizations, the United States rarely stands up for the idea that there should be any standards for joining the club. Instead, it wants the club to be as big as possible. It’s eager to admit, very reluctant to kick out.

With his own inimitable vulgarity, President Lyndon Johnson summed up this approach. Alluding to FBI Director J. Edgar Hoover—who was almost a foreign power unto himself—he said “It’s probably better to have him inside the tent pissing out, than outside the tent pissing in.”

Today, we assume that inclusion leads to reformation. But once the bad guys are in the club, they abuse its privileges.

The problem with the theory is that it only works on places that want it to work. There was an excellent argument for bringing Eastern Europe in from the cold after 1989, because, having been force fed on Soviet Communism since 1945, they wanted nothing more than to reject it.

But if the old regime is still in place—as it is in Iran, Cuba, Burma and China—engagement doesn’t work. It’s touchingly innocent to believe that negotiations can erase the desire of an autocrat to hold onto power, or that prosperity will naturally cause democracy to flower.

But China’s reforms actually stalled after it was admitted to the WTO. As President Dwight Eisenhower’s secretary of state, John Foster Dulles, wisely pointed out, the United Nations “was not set up to be a reformatory. It was assumed that you would be good before you got in and not that being in would make you good.”

Today, we assume that inclusion leads to reformation. But once the bad guys are in the club, they abuse its privileges. We supported Russia’s admission to Interpol, the international police organization, in 1990, at the end of the Cold War. But today, Russia uses Interpol to harass dissidents, refugees and exiles.

We emphasize the importance of the laws of war. But Hamas uses those laws to wage a media campaign against Israel, by strategically violating them and then complaining about legitimate Israeli responses. Hamas gets the privileges of the laws of war, without actually respecting them.

With places that want to change, there’s a good argument for inclusion. But inclusion should come only when the nation meets minimum standards: If the UN is supposed to embody the values in its charter, its members should live up to them.

The problem with letting everyone into the tent is that they don’t piss out. They piss in.