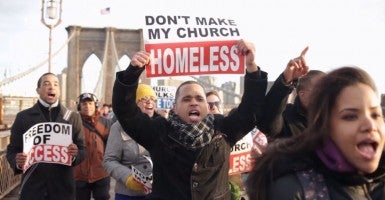 The same week a national debate swept through the nation surrounding Indiana’s decision to adopt a religious freedom law, the U.S. Supreme Court on Monday declined to review a historic lawsuit regarding a New York City policy that plaintiffs say is discriminatory toward religious organizations.

School facilities in New York City are open on weekends for a wide range of community groups, but the city’s Board of Education has a policy specifically banning those who want to use the space to worship.

“Any community group can meet in New York City’s school buildings during non-school hours for any purpose—except for religious groups meeting to worship God,” said Jordan Lorence, senior counsel with Alliance Defending Freedom, which has represented Bronx Household of Faith for 20 years in its legal battle against the city. “This policy is clearly nothing more than religious segregation—the kind of segregation the mayor has said he opposes.” In its decision not to take up the lawsuit, the Supreme Court said the case, “involves no government sanction imposed against any religious practice, but rather a decision not to aid religious worship services by providing space in public schools at fees far below market rate.”

It appears that de Blasio went so far as to give religious groups the green light to violate the city’s policy and continue using school space for worship, which many are already doing, while the city “develops rules.”

“The Administration remains committed to ensuring that religious organizations are able to use space in City schools on the same terms provided to other groups,” Wiley Norvell, a spokesman for de Blasio said in a statement to The Daily Signal.

Now that litigation has concluded, the City will develop rules of the road that respect the rights of both religious groups and non-participants. While we review and revise the rules, groups currently permitted to use schools for worship will continue to be able to worship on school premises under DOE guidelines.

De Blasio’s opinion differs from that of his predecessor Michael Bloomberg, who first put the policy to ban religious services in public schools in place.

The intention was to prevent public schools, which are government entities, from “hosting and subsidizing” worship services. Donna Lieberman, executive director for the New York Civil Liberties Union, told The Daily Signal via email that the Supreme Court “should be applauded for doing the right thing.” She said:

When a school is converted to a church Sunday after Sunday, year after year, it sends a powerful message to students and the community at large that the government favors that particular church. Children who are not part of the favored congregation feel diminished, and both the church members and the community stop seeing the distinction between the church and the school. That hurts kids, that hurts people who aren’t members of the church, and that hurts one of our nation’s most cherished principles, the separation between church and state.

Plaintiffs have a simple reason for arguing their case.

They say religious groups should be able to meet in schools under the free speech and free exercise provisions of the Constitution.

But Lorence, the lawyer defending Bronx Household, said that if New York had an Indiana-like Religious Freedom and Restoration Act—which they do not—“it would have given us another tool to use to protect the churches.”

“We would have probably used a state [Religious Freedom and Restoration Act] in our lawsuit, if it had existed in New York state,” he said.