The House Just Hiked the Deficit. Now It’s the Senate’s Time to Be Responsible. 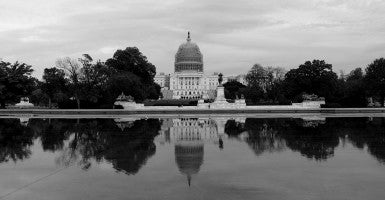 Senators prudently left Washington for a two-week Easter recess last Friday without saddling Americans with $500 billion in new debt over the next twenty years.

Last week, the House passed the irresponsible Pelosi-Boehner deal, legislation which permanently repeals the sustainable growth rate formula (which determines how much Medicare pays doctors) and adds $141 billion to the deficit (before interest) over the next decade.

It is important that senators use this time to reflect on the damage the Pelosi-Boehner deal would do to the nation’s fiscal health and identify spending cuts and reforms.

If lawmakers wanted to repeal the sustainable growth rate formula, there are ways to do so without increasing the deficit. Heritage health care experts Alyene Senger and Bob Moffit identified nearly $800 billion in savings over the next decade from four meaningful, bipartisan Medicare reforms alone.

Nevertheless, the House voted 392-37 to pass a bill that would add to the deficit. Heritage’s Paul Winfree calculated that after adding interest, the deal would increase the national debt by $174 billion over the first 10 years. Building on calculations by the Congressional Budget Office, the Committee for a Responsible Federal Budget projects that, including interest, the House SGR bill (H.R. 2) would add roughly $500 billion to the debt through 2035 (20 years from now).

The House vote to increase deficits with the unfunded repeal of the sustainable growth rate formula is particularly shameful because it followed merely one day after the House passed its balanced budget blueprint with great fanfare. A true commitment to putting the budget on a path to balance takes more than a show vote. It takes a commitment to control spending—the root of growing deficits and debt—and that begins with rejecting any new spending increases.

The Senate, in its budget blueprint which also passed last week, committed to fully pay for the sustainable growth rate formula repeal (Sec. 305, deficit-neutral reserve fund) and save hundreds of billions more in Medicare. While the Senate budget does not endorse specific Medicare reforms, it adopts the same level of Medicare spending as President Obama’s budget proposal, saving about $430 billion in mandatory Medicare spending over the next 10 years. As Sen. Ben Sasse, R-Neb., wrote about the House bill in Politico:

It’s hard to believe politicians can’t save another $14 billion a year (the annual amount needed to finish paying for the $141 billion 10-year cost) in a program that spends more than $625 billion every year. Even Obama’s budget saves more than $400 billion over the next decade—and while I can’t agree with all of his policies, I would note that’s nearly double what would be required to offset the full SGR [sustainable growth rate] repeal. We shouldn’t give up on finding fiscally responsible offsets for the SGR. Rather, we need continued leadership to make tough, but fiscally responsible choices.

Growing Medicare costs are at the core of growing spending, which drives deficits and debt to ever higher levels. Higher deficits and debt hurt economic growth by crowding out private investment, which is crucial to improving American living standards. At current rates, public debt borrowed in credit markets will exceed the size of the U.S. economy by 2028, and healthcare and retirement programs are responsible for most of the increase in the debt.

The Senate has an opportunity to act responsibly where the House failed. When the Easter recess ends on April 13, Senators should return to Washington with at least enough health care savings proposals to cover the cost of permanently repealing the sustainable growth rate formula. Even better would be if the Easter bunny delivered additional deficit reduction.