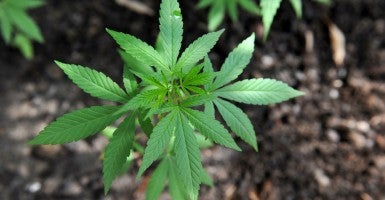 A school in Virginia suspended an 11-year-old boy for 364 days after he brought a leaf to class that resembled marijuana.

One problem: It was not marijuana, and the school knew this—but still suspended him for almost a year anyway.

The sixth-grade son of Bruce and Linda Bays attended Bedford Middle School and was in the gifted and talented program. According to reports, the young boy allegedly showed a leaf to his classmates and bragged that it was marijuana. The other students told school administrators, who in turn, searched the boy’s backpack and found the leaf in question, along with a lighter.

Bedford Middle School Assistant Principal Brian Wilson called the boy’s parents to let them know their son had been caught with drugs while on the school premises.

“He told me he had been seen in the bathroom with a marijuana leaf and lighter and that I needed to come quickly,” his mother said. The boy’s father recalled that, “During the hearing I asked Wilson, ‘What about the field test on the marijuana leaf?’” But the principal only stated that, “‘I’m not qualified to interpret the results of the field test.’”

The boy was charged with marijuana possession in juvenile court and suspended from school for 364 days. Several months later, the family found out from the court prosecutor that the leaf had been field-tested three separate times and showed no traces of marijuana or any other illegal substance. As a result, the charges against the boy were dropped.

But perhaps the most revealing information the family learned was that the school resource officer, Deputy M.M. Calohan, the person who accused the young boy of drug possession to begin with, knew the leaf was not marijuana, and recommended his suspension anyway.

This is because under the school guidelines at Bedford Middle School (and many other schools in the Commonwealth of Virginia) a student who possesses “lookalike” drugs can be punished as if he possessed the real thing. The guideline reads:

The unlawful manufacture, distribution, dispensation, possession, use or being under the influence of alcohol, anabolic steroids, or any narcotic drug, hallucinogenic drug, amphetamine, barbiturate, marijuana or other controlled substance … [or] imitation controlled substances or drug paraphernalia while on school property, while going to and from school, or while engaged in or attending any school-sponsored or school approved activity or event, is prohibited, and will result in an automatic recommendation of expulsion.

Although the drug charges against the boy were dropped, the school still treated him like a criminal. Under the terms of the suspension, the 11-year-old is required to see a pediatric psychiatrist to be evaluated for substance abuse problems, and must attend an alternative school for troubled youth where he would be patted down and searched every morning for drugs. The boy’s parents were able to come to an agreement with the school system that allows their son to attend the alternative school online instead of in person. Moreover, he will still be on probation until this September. The parents are now suing the school in federal court for malicious prosecution and a violation of due process.

While it is easy to recognize that misbehavior in school is a problem that should be addressed, it should also be obvious that children will naturally make jokes and get into trouble. The question is how severe must they be punished for their mistakes? Treating students as criminals for misbehavior that does not result in serious harm to other students or themselves only serves to hinder their education.

As a result of his suspension for allegedly showing a leaf to fellow students, the sixth-grader in Virginia now is “skittish about going out in public, suffers from panic attacks and is depressed,” according to his parents. He now sees a therapist to help deal with these issues.

More and more American families are choosing to homeschool their children, and after reading about how Bedford Middle School (and many other schools around the country) deal with student misbehavior, it’s not hard to see why.